Today we’re going to review the New Cascadia Traditional Bakery, which is a great place for people with celiac disease or gluten allergy and I’ve got to say that we’re really excited about this place. Also, there is so much ground to cover that I’m going to do this review in two parts. 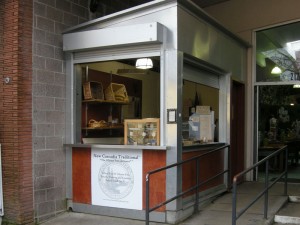 New Cascadia Traditional describes itself as a dedicated gluten-free artisan bakery. They create breads, pastries, pies, cupcakes, and cookies. The bakery was started by a husband and wife who were dissatisfied with the gluten-free baked goods they found in stores and decided that they could do better. At first they sold their goods at the Portland Farmers Market, and later opened the store on NW Glisan. 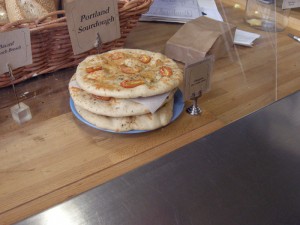 When we visited their store, the person behind the counter was very friendly and helpful. We discussed what flours we like to use for the breads we make. Sienna has felt for a while that our own home-baked breads taste a little funny, and they told us what flours would give a bread a funny taste. When asked about the ingredients of any of their breads, they were able to list them, which was really nice. 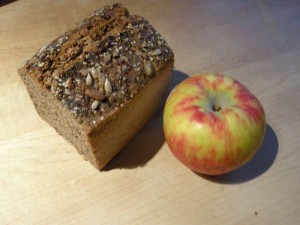 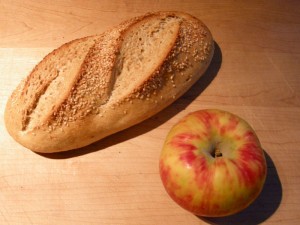 For our first review, we got the Seeded Bread and the Sesame Batard. (For the record, the apple in the pictures is a gigantic honeycrisp and I think it makes both loaves look a little smaller than they really are.) 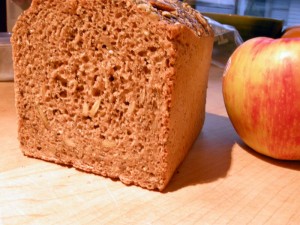 The Seeded Bread is made to emulate a traditional German bread called Vollkornbrot. Dense and brown in color, this bread is flavorful, but not so flavorful that you couldn’t use it for a sandwich. It has sunflower, sesame, poppy, and pumpkin seeds on top and then sunflower seeds baked into it. The first time we tried the Seeded Bread, Sienna exclaimed that this is the kind of bread she wants to be able to make at home. It is absolutely perfect toasted with some hummus on it. It reminds me of the kind of whole wheat bread you can get with sesame seeds in it, but not as fluffy as most. Also a plus is that the bread toasts excellently. 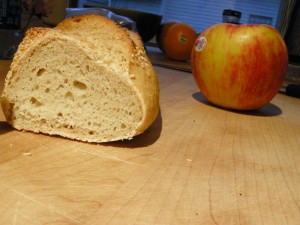 The Sesame Batard is a little more controversial. One problem you have when making gluten-free bread is that gluten is what makes the bread stick together and also makes the dough elastic. When you take out the gluten, very often you end up with bread that is more crumbly and more “cake-like” and won’t really stretch or bend. That is the case with the Sesame Batard. It is much more dense than a regular baguette and you won’t be able to tear off a hunk very easily because the bread is more hard. Despite my initial disappointment with the texture, there were some pluses that saved the bread for me. Plus number 1: It has a faint sour-dough flavor. Plus number 2: If you close your eyes and imagine that you’re eating a nice, dense, chewy New York style bagel, this bread has almost that exact flavor and texture. This bread is great next to a hearty bowl of soup or lightly toasted and buttered all by itself. And if you suffer from celiac disease and really miss having a baguette with a bottle of wine and hunk of cheese, I think it’s safe to say that this is as close as you’re going to get gluten-free.

That’s it for today. Next time we’ll review their cinnamon rolls and cookies.

Times we have visited: 2 (So we feel pretty good about our rating)
Overall rating: 5 out of 5 stars
Price compared to “regular”: Somewhere around twice as expensive for breads