Not too long ago I was on Amazon’s site and one of the reviewers there was saying that all the bread recipes from Bette Hagman’s book, The Gluten-Free Gourmet Bakes Bread were bad and tasted funny. We already reviewed a recipe from her book here , so we know THAT’S not true, but I figured that as we make more from the book we would share our experiences. Like we said before, there’s something in this book for everyone, especially if you are gluten intolerant or celiac.

So on to the bread. The original recipe for the bread I’m reviewing today has only millet flour, corn starch, and tapioca flour, which means it’s pretty low on the number of flours you need. (Apparently, though, when buying Millet flour you need to check to make sure it is not contaminated.) This is her “Basic Millet Bread” recipe on page 82. We also now have a millet bread recipe posted on Gluten Free Portland dot Org.

So as I said, on to the bread. This is another great recipe. It ended up being a lot like a whole-wheat sort of bread. We added some teff flour to this recipe. Basically we replaced half of the tapioca flour with teff flour. Sienna followed the directions from the book but made the following changes: She used an egg instead of egg replacer (because we didn’t have any.) She used canola oil instead of butter and, following the directions for this in the book, decreased the amount of water to offset the change. She didn’t add gelatin. She used vinegar instead of dough enhancer. She added two tablespoons each of pumpkin seeds and sunflower seeds. Then she put it all in the bread maker (following the bread maker manufacturer’s instructions of course) and BAM! 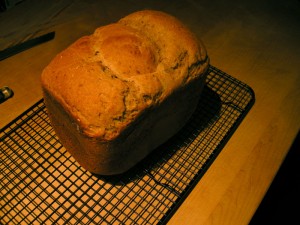 Sorry about the dark photos. I need to invest in some better lighting for our Gluten Free Recipe Laboratory. 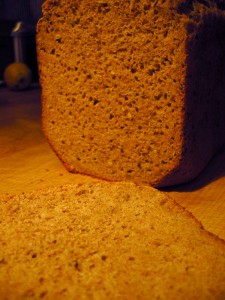 Sienna loves this bread! I like it too, but not as much, I’m afraid. It is fluffy and toasts up really well. Like the last one we reviewed, this is the kind of bread that is great for making sandwiches. It also toasts like a champ and tastes great with jam or with eggs and bacon.

Did I mention that we used a bread machine to make this bread?