Happy Year of the Ox! In honor of the Chinese New Year, I decided to review our one Chinese restaurant on the restaurant list. P.F. Chang’s is a restaurant chain and the Portland Oregon branch is in the Pearl, about a block away from Powell’s on Couch. It is large, popular, and always seems to be 85% full. 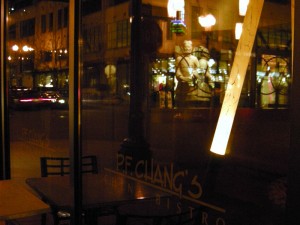 Our Executive Researcher, Sienna, was out of town visiting her family, so I had to go it alone. I’m going to apologize because the food photos aren’t up to my usual standards. I was sitting at the bar with not one, not two, but three bartenders watching me. As a result I felt conspicuous taking photos of my food with a camera, so I covertly used my phone instead.

P.F. Changs has a completely separate gluten-free menu. It is very brief, and strangely omits all beef and pork dishes, but there’s enough on it that most people will probably be able to find something they want to eat. They even have a gluten-free appetizer, soup and a dessert. They also have a full bar.

I started with some Egg Drop Soup, which was a little salty for my taste, but the flavor was right. For my entree, I got the Lemon Chicken. The chicken comes breaded, which was a nice surprise, and is served with brocolli and thin slices of lemon. The whole dish smelled like garlic when they brought it out, which got me excited. Unfortunately, besides the garlic, the flavor of the dish was a little underwhelming. The chicken was done right, but I found myself eating the chicken with the lemon slices to provide flavor. Also the brocolli was overdone. At some point, I got to an area where the chicken had enough sauce on it, and suddenly BAM it was good. So the sauce is good they just need to hit all of the chicken with it. (Doh!) 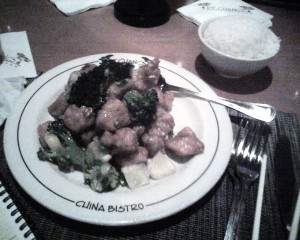 I finished the meal with their gluten-free dessert, the Flourless Chocolate Dome. This is a seriously chocolatey confection served with raspberry sauce and fresh berries. Imagine a quarter-inch thick piece of chocolate cake with something akin to a piece of fudge on top. I didn’t manage to make it through the whole thing, but I liked it. 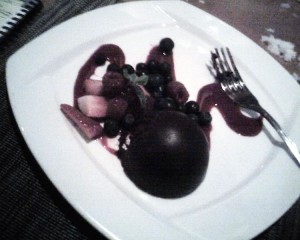 Notes from a second visit:
P.F. Chang’s has gluten-free soy sauce they can bring to your table. Our rice was dry like it had been left out and then microwaved. The Singapore Street Noodles are awesome! Very much like fried rice but with rice noodles. The Spicy Chicken is good but suffers from the same problem I had with the Lemon Chicken and that is: Not enough sauce. Maybe I should ask for extra sauce next time.

To wrap it up, I think P.F. Chang’s is a good place to get Americanized Chinese Food. I’ve eaten there before and I would go there again. Another nice thing about P.F. Chang’s is that they have their nutritional info available. When I was finished, the bartender brought me a fortune cookie, but he didn’t know if it was gluten-free or not. I figured it wasn’t, but I still broke it open to get my fortune. It said: “Your efforts in a critical area will soon be rewarded.” That sounds good to me!

Times we have visited: 3 (So we feel pretty good about our rating)
Overall rating: 3.5 out of 5 stars
Price compared to “regular”: Same price. Most dishes are around $12.