I’m at home sick today and was doing some reading on gluten-free living and ran across an excellent list of foods and food ingredients that are not gluten-free. While reading through the list I was checking off items on my mental list of what is safe and what is not. I didn’t actually get too far down the list before I hit “blue cheese” – blue cheese!?!!? It turns out that blue cheese is made with bread.

On further investigation, it happens that REAL blue cheese is made with bread. Manufacturers who make blue cheese the traditional way still start with bread to get their mold and then introduce the mold to milk curds. So how likely is it that the bleu cheese you’re looking at in the store has gluten? It looks like it’s less likely than you might expect. Here’s a site with further information on blue cheese.

While we’re on the subject of foods you would never suspect, I’ve put together a quick list of less obvious gluten-containing items. It’s sort of like a “I remembered that you’re vegetarian so I made you a chicken salad” list. (This is not an exhaustive list of gluten-containing foods by any means.) 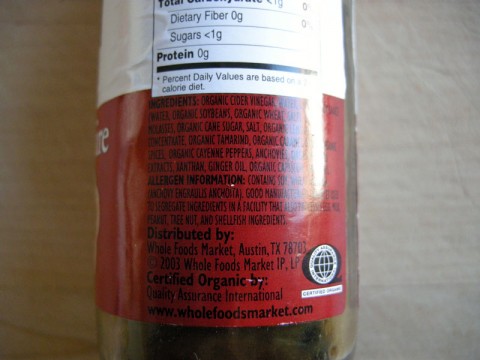 It may be organic, but it isn't gluten-free.

Beer – I was gluten-free for a while before I gave any thought to our little fermented friends. Beer is just plain not gluten-free. Also, any alcoholic beverage that is made with wheat and not distilled is suspect.

Bouillon – This is one where a person would probably catch it by checking the ingredients, but might not think to. It’s supposed to be dried chicken broth and spices and salt and salt and salt, right? Wrong!

Bulgar – I always forget this one for some reason. It is another name for wheat that has been processed.

Chewing Gum – Manufacturers coat some chewing gums with wheat flour to keep them fresh. So you have to check the labels. I grew up in the 70s so I believed (or at least liked to believe) the urban legend that chewing gum was made with spiders eggs. Little did I know.

Couscous – You can call it what you like but it’s really pasta. I get it confused with polenta, which is corn, and risotto, which is rice.

Graham Crackers and Graham Flour – Our pal wheat by another name.

Semolina – Fancy name for wheat they make pasta out of.

Tabbouleh – Made with bulgar, which appears above. Yes, I have thoughtlessly eaten tabbouleh at our favorite Lebanese Restaurant.

Udon – Although I love Japanese food, I never really liked these Japanese noodles anyhow. I do mourn for my loss of ramen, though. *sigh*

This deserves its own paragraph: Any Broth, Sauce or Gravy – These are all suspect and should be checked before you eat them. You would never expect it, but the roux in gumbo has a ton of flour in it. Apparently, chefs love to put some roux in their jambalaya. Ouch! And I love a good jambalaya.

OK well that’s enough depressing news for one day. I hope everybody will chime in with comments on food items that you were surprised to find contained wheat or gluten.