We are really excited because we found a great place to have pizza that’s not all the way down in Sellwood (sorry, Picazzo’s)

The Oasis Cafe is on SE Hawthorne in Portland Oregon, just down the block from Powell’s, and across the street from the Bagdad theater. I love and hate this slice of Hawthorne. Love because of Powell’s and because there’s good people-watching and bustle and it’s groovy. Hate because it reminds me of the Haight in San Francisco. 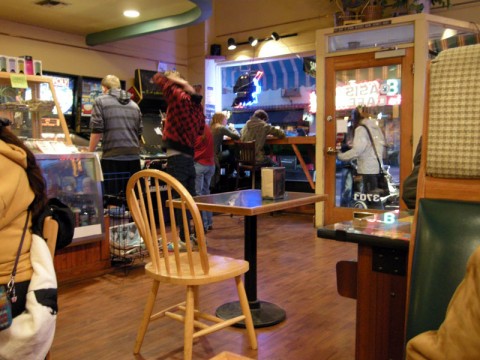 Two things become very clear after you’ve spent a couple of minutes in the Oasis Cafe. One: You are in a pizza joint. Two: They are doing brisk business. There are people going in and out. Most people are getting slices and leaving. Like most pizza joints, the place isn’t insanely clean but you’d have to be pretty uptight to be offended by their level of cleanliness. The music is abrasive. There might be a screaming kid in the booth next to yours. There are pinball machines, and you can sit at a bar that faces the windows and watch people go by (and stuff your face.)

They serve beer, salads, sandwiches, and pizza. They also have some cakes, which we saw a bunch of people order so they must be OK. Did I mention that the people watching was good?

Now two bad things: We were told the pizza was going to take 25 minutes and it took 35. And the gluten-free pizza is available in 12″ size only and it’s $4.50 more than the regular pizzas.

One not bad but not real good either thing: The caesar salad is only OK.

Some other good news: A phone call to the Oasis revealed that they do their best to avoid getting wheat flour on the gluten-free crusts. They get the crusts packaged and take steps to keep from contaminating them. (This contrasts with a phone call we made to a different place we won’t name where the person who answered the phone said “If you’re really allergic to wheat you shouldn’t eat here because there is flour on everything.”) 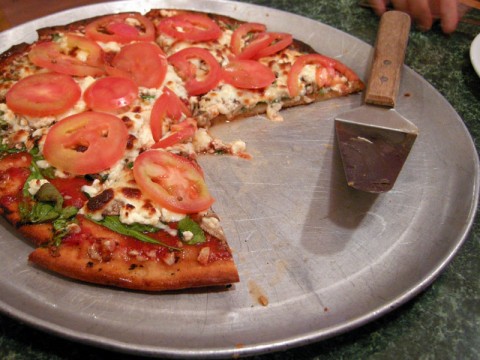 The awesome news: The pizza we got was awesome. We got the Oasis, which is mozzarella, feta cheese, garlic, tomato sauce, mushrooms, tomatoes, and spinach. The sauce was flavorful. The garlic was chunky. The crust was thin and crunchy. The Oasis uses the Nugrain Foods pizza dough which a lot of other pizza places in Portland Oregon have adopted. We are happy to report that the Oasis pizza crust was great. We both actually feel that the crust at Picazzo’s would be better if they cooked it more, but the crust at Oasis was just right.

If we were just rating the pizza we had, we would give the Oasis a 5 out of 5. But when you add on the various annoyances, the too-long wait, and the expense, we had to dock them a point.

We want to know: Have you been to the Oasis? Do you have a favorite gluten-free-friendly pizza place in Portland? Have you had a similar experience? Let us know!

Times we have visited: 1 (So your experience may vary.)
Overall rating: 4 out of 5 stars
Price compared to “regular”: Add $4.50