In the interest of full disclosure I think it’s only fair that I admit that I’m not really all that crazy about waffles. If good waffles are put in front of me I will eat them, but I don’t really seek them out. I think this might be the result of eating too many bad quality waffles over the years. It seems to me that a bad quality waffle is much worse than a bad quality pancake. They have more of a problem with uncooked batter and also lose their crispness too easily.

This is totally a side note, but one of my favorite Simpson’s moments is when Homer makes waffles. He mixes up the batter (his recipe includes a whole package of caramels,) pours it onto an iron with the batter overflowing. Then he runs a finger around the sides of the iron and eats all the batter that has overflowed. (“Mmmmm… Waffle runoff”) When the waffles are done (they’re all burnt, of course) he wraps one around an entire stick of butter and puts it on a toothpick. I love that scene. 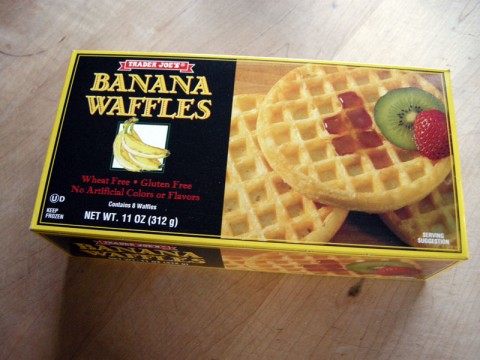 So getting back to waffles in general and Trader Joe’s Gluten Free Banana Waffles specifically, as with their frozen gluten-free pancakes, they get points for making a great gluten free product, but they lose points for lots of packaging. Each box has eight waffles and the box is big enough that the waffles kind of flop around in it. They also lose points (as with the frozen pancakes) for having a lot of salt. A serving is two waffles and two waffles have 440 mg of salt in them. 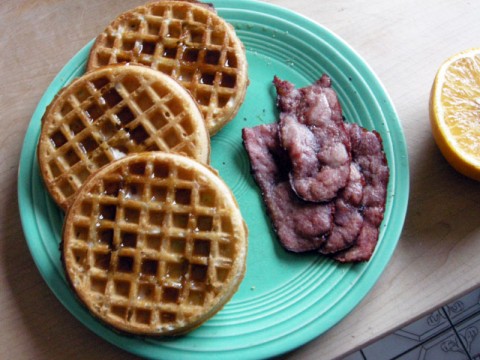 On the plus side, they’re fast and easy. Also, I think they taste exactly like regular frozen waffles, so if you’re a frozen waffle fan, you’ll like the Trader Joe’s Frozen Gluten Free Banana Waffles. As a butter and maple syrup delivery system, they get the job done and they’re better than a poke in the eye with a sharp stick.

We want to know: Is there a good place to get gluten free waffles in Portland? Do you have a favorite Trader Joe’s product? Let us know in the comments.

Times we have visited: several (So we feel confident about our score.)
Overall rating: 3 out of 5 stars
Price compared to “regular”: Same