Later Note – January 2010 – We’ve corresponded with the owner of Sweetpea. They have done a lot of research on baking gluten-free goods and maintain that their gluten-free options really are gluten-free. At the same time, they stress that they are a bakery that uses wheat in a shared area with their gluten-free products. They say that they are very careful about avoiding cross-contamination, but as an end result, folks who are very sensitive to gluten should probably stay away. we haven’t been by to check them out again, but will post about it when we do. – End later Note

It’s a little premature to call this a “restaurant review” because they’re not on our restaurant list, and they’re more of a bakery, AND we’ve only ever had their muffins, BUT they’re in Portland AND they’ve got gluten-free stuff and thus we’re covering it. Regular readers may remember that we posted about Sweetpea Bakery having a gluten-free brunch on this past Father’s Day. 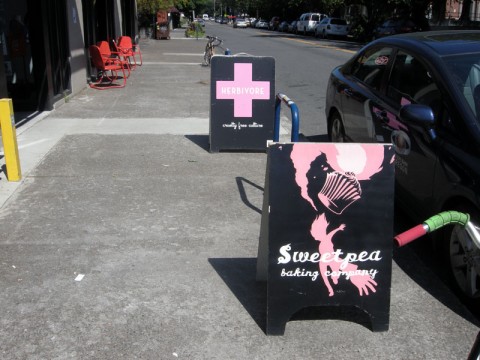 Sweetpea is down on SE Stark on the corner of 12th Street. It’s in a little vegan ghetto right next to Herbivore and Food Fight!. Did we mention it’s a vegan bakery? I don’t know about anybody else, but I love vegan bakeries and here’s why: Vegan bakeries have attitude. Since they’re a vegan bakery, they feel like everything they make has to be awesome so that people don’t think vegan food is terrible. And thus most vegan baked goods are way better than anything you’re going to get at a regular bakery. 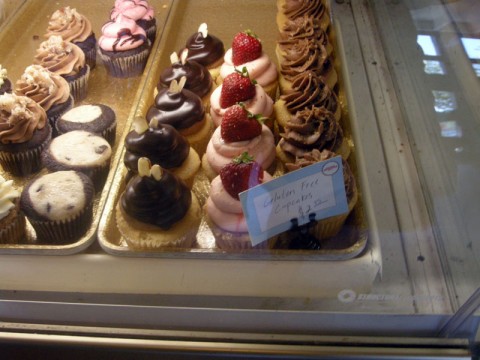 This is certainly not as fetching as the case at Pix Patisserie, but the goods are pleasing to the eye. When we went, they had one kind of gluten-free muffin, gluten-free brownies, one kind of gluten-free cookie, and these here cupcakes. In the interest of full disclosure, we didn’t ask them what steps they take to prevent cross-contamination. (It’s a new goal of mine to always ask that and report it here.) We did, however, ask about the gluten-free muffins. The muffins are different flavors depending on the day. This particular day, the muffins were coconut. 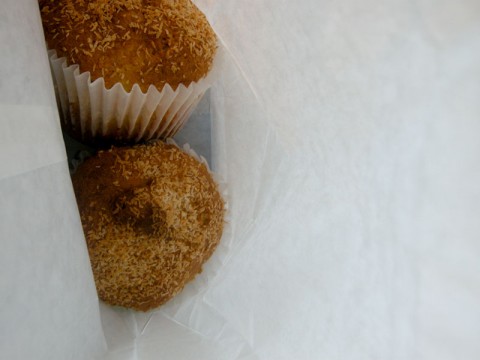 These muffins were awesome! They were fluffy, moist, and delicious. In fact, they were almost like the perfect love child of a cupcake and a muffin. We plan on going back to Sweetpea on one of their gluten-free brunches and giving a full report.

We want to know: OK so we really want to know, how do you gluten-free people feel about buying baked goods from a bakery that uses wheat? I have to say I feel a little nervous. Have you been to the Sweetpea for their gluten-free brunch? We want to hear from you. Let us know in the comments.

Times we have visited: 1 (so your experience may vary.)
Overall rating: 4 out of 5 stars
Price compared to “regular”: kind of expensive.