Paneer is a relatively soft Indian cheese. A tikka masala is generally a creamy red lightly spiced tomato sauce. Masala by itself simply denotes a mixture of spices, and often refers to something like a curry. 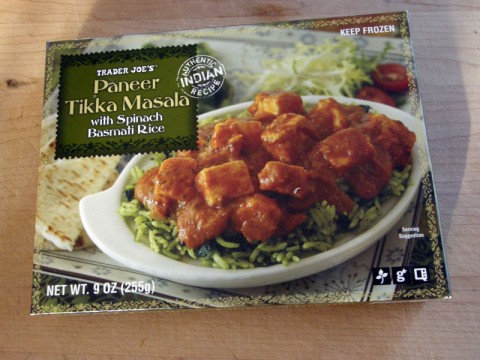 The box contains one serving, which is 330 calories. 190 of those are from fat. The dish has an alarming 850 mg of salt. Luckily, I didn’t think it was so hot. I like Tikka Masala in general. There was an Indian pizza place in San Francisco and they would make a pizza that tastes a lit like the Trader Joe’s Tikka Masala, but was a lot better. What would I change? I would add less salt and more spices.

Like the Chana Masala, the Tikka Masala benefits from including something sweet like raisins or dried cranberries. It is vegetarian, gluten-free, and is easy to pack for work lunches. I just wish it was better.

We want to know: Do you have a favorite Indian restaurant in Portland? We still haven’t found one! Have you tried other Trader Joe’s Indian dishes? Do you get upset (like we do) that most of the Trader Joe’s asian cooking sauces aren’t gluten-free? Let us know in the comments!

Times we have visited: 1 (So your mileage may vary.)
Overall rating: 2 out of 5 stars
Price compared to “regular”: Same