We’re getting close to our one year anniversary of Gluten Free Portland dot Org, and a lot of our long-term readers will know by now that I love pancakes and am on a one-man search for the best gluten-free pancakes in the world. Right now, my preferred gluten-free pancakes are the Trader Joe’s frozen kind, which we reviewed here. We also tried the Trader Joe’s mix, reviewed here, but I liked the pre-made ones better, mostly because the mix doesn’t have much flavor. Over the year we’ve received a lot of comments from people that we should try Pamela’s Gluten-Free Baking & Pancake Mix. So we finally did it. 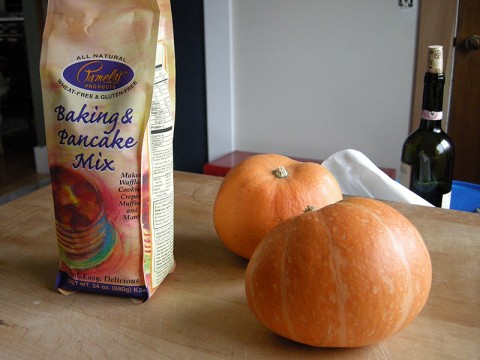 If you have trouble getting Pamela’s mixes at your local store, you can get them on Amazon. Here’s a list of the ingredients: Brown Rice Flour; White Rice Flour; Cultured Buttermilk; Natural Almond Meal; Tapioca Starch; Sweet Rice Flour; Potato Starch; Grainless & Aluminum-Free Baking Powder (Sodium Bicarbonate, Sodium Acid Pyrophosphate, Potato Starch); Baking Soda; Sea Salt; Xanthan Gum. Those of you who watch for allergens in ingredient lists will have caught the buttermilk and almond meal. Their cross-contamination statement states that this mix is manufactured on shared equipment that is also used with tree nuts, soy, eggs, and milk. Seeing as how we’re talking about the ingredients, their serving-size (two 4-inch pancakes) contains about 390 mg of sodium. That compares well to the frozen Trader Joe’s, which have 430 mg in a serving. 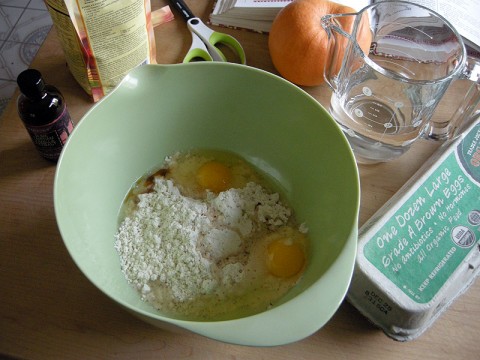 Making pancakes with this mix is ridiculously easy. Depending on the size of your skillet, it can be a good idea to pre-heat the skillet. You’ll want it hot enough that drops of water will sizzle, but not so hot that they jump. Put the Pamela’s gluten-free mix in a mixing bowl and add eggs, oil, and water. I also added a half teaspoon of vanilla. Obviously, you’ll want to add the water last, and do the thing where you add most of it in and then mix it up to make sure your mix doesn’t get too watery. Your mix should be wet enough that it pours, but thick enough that it’ll hold together when you pour it on the skillet. 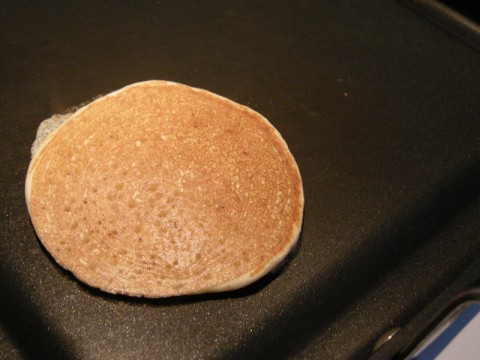 It is in the very nature of pancakes that your first batch won’t be good. I always cook only one pancake first to make sure the temperature is right. If the skillet is too hot, the insides won’t cook. If it’s too cold, the outsides won’t brown properly and the pancakes will be dry. 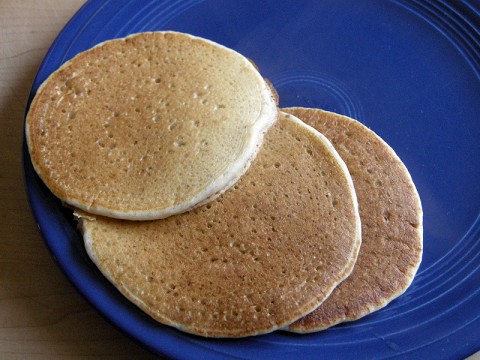 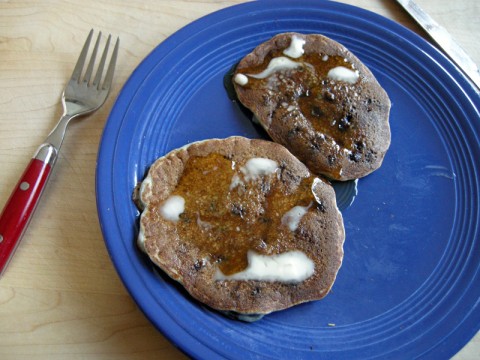 I also made some blueberry pancakes. By now you’re probably like “Yes Yes Dave, but how did they taste?” I thought they were good. They cook up fluffy and moist. If someone were to cook them for me, I would eat them happily. Sienna didn’t like them much and said that they had a strange aftertaste. She said that they tasted like ashes. Maybe we were expecting them to be really amazing because of all the positive comments we’ve read. It’s pretty clear that this mix is rather popular with the gluten-free crowd. I would say that the Pamela’s mix is better than the Trader Joe’s gluten-free mix, but the finished pancakes aren’t as good as the Trader Joe’s frozen packaged pancakes. 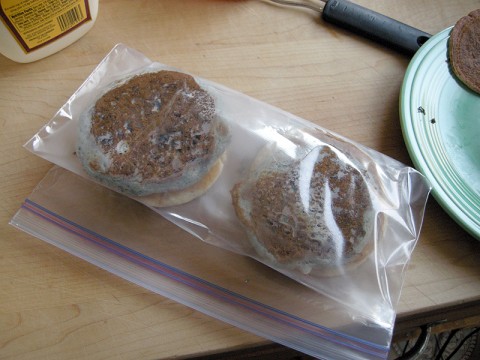 Speaking of frozen pancakes, I like to make a large batch of pancakes and then freeze them to eat later. They reheat very well.

I think that, ultimately, if you miss pancakes and want to make some from a mix, I would recommend giving Pamela’s a try. From the disclosures on the package, it looks like there isn’t a chance of gluten cross-contamination, which is nice. The recipe is easy, and besides just pancakes, the package includes recipes and directions for making waffles, crepes, muffins, chocolate chip cookies, and also for breading chicken or fish. (For breading chicken and fish, we really love using garbanzo and fava bean flour with pepper and paprika – see our recipe here).

We’ve been having a lot of good luck using some of the various gluten-free flour mixes available on the Internet. Maybe it’s time for me to start looking for some.

We want to know: Do you have a favorite store-bought gluten-free baking mix? How about a flour mix or pancake recipe on the Internet? Send us a link. Let us know in the comments!

Times we have visited: 1 (So your mileage may vary.)
Overall rating: 3 out of 5 stars
Price compared to “regular”: about 45% more (based on prices of wheat-based mixes on Amazon)

Check out other Pamela’s Mixes on Amazon.