Reader Allyson notified us of gluten-free options at the Radio Room on Alberta, so we went to check it out. Their dinner menu has a number of gluten free items, but their brunch menu does not, so make sure you go there for dinner. Besides a regular dining area, the Radio Room also has a lounge and an upper deck.

The radio room itself has more of an upscale bar atmosphere, sort of like Echo on MLK. The decor is half ’50s diner and half Interview Magazine. When we visited, they had various old school punk and post-punk playing at a comfortable volume. So, the Sex Pistols, Ramones, and other such bands. They have a very long cocktail list, and quite a long menu. The gluten-free offerings can be listed rather quickly. They are: Bacon Wrapped Prawns, Cab Calamari, Radio Wings, Baby Artichoke Salad, English Beet Salad, Mashed Potatoes Side with Gravy, Ahi Tuna Tacos, Stuffed Chayote Squash, and for dessert, a chocolate mousse dubbed “Chocolate City.” After some discussion, we learned that the Caesar Salad could be made gluten-free by omitting the croutons.

Our waitress was very nice and knowledgeable. She answered all of our questions about the menu and in the case of the Caesar Salad, came out with a ingredient list, which was very reassuring. She also informed us that they have a dedicated fryer for their gluten-free fried items, which is really awesome. 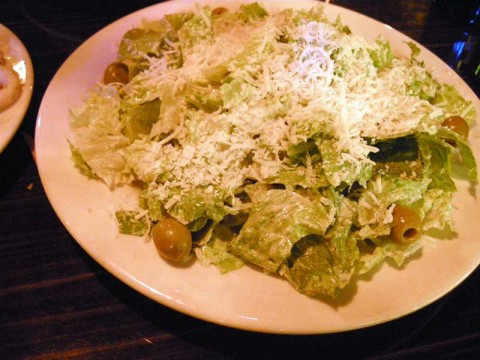 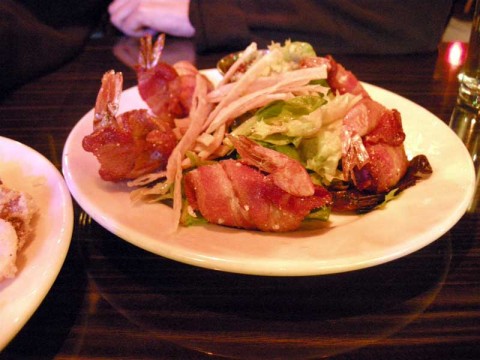 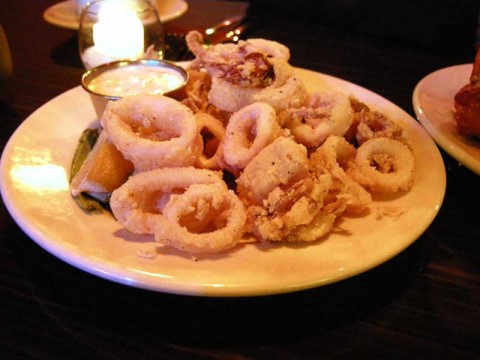 Although our tipster, Allyson, recommended the Ahi Tacos and English Beet Salad, we decided to eschew convention and get a Caesar salad and two openers instead of any of the entrees. This is in part because we both love bacon and also because I’m a man on a mission to find some good gluten-free calamari.

The Caesar salad, as you can see, had a heck of a lot of cheese on it. While the lettuce was fresh and the olives were tasty, we felt that the salad was a little too dry and were wishing that they put more lemon juice and some anchovies in it. The Bacon Wrapped Prawns were interesting. They came with a raspberry-chipotle dipping sauce. I thought that this was a very novel combination, but we both agreed that the sauce didn’t go very well with the bacon for some reason. Maybe it was just us, though. I could see someone really getting into the combo. Sienna felt that the prawns were undercooked, because the texture was a little gristly and springy. The Calamari was good. It was way better than the Calamari at the Hawthorne Fish House and came with a very nice tartar sauce. At the same time, like other gluten-free Calamari we’ve had, it was a little tasteless. Sienna commented that someone should try making a gluten-free beer battered Calamari.

As you can probably tell by the above, we ended up feeling like the Radio Room’s gluten-free offerings were good but not awesome. We did end up feeling like it would be a great venue if you wanted to go out drinking with a bunch of friends and get some bar food. For that purpose we would definitely recommend it.

We want to know: Do you know of any other bars with gluten-free menu items? Have you eaten at the Radio Room? What did you think? Let us know!

Gluten-Free Safety Rating: Gluten-Free Friendly But Ask Questions
Times we have visited: 1 (So your experience may vary.)
Overall rating: 2.5 out of 5 stars
Price compared to “regular”: Same