We had heard about the Berlin Inn from both our Berlin Inn comments page and a friend, and thus we decided to give it a try last week. The restaurant is located in a house at SE 12th and Powell. This is one of the areas of town that we don’t get to much, but now that we know about this place, we’ll be visiting the neighborhood a lot more.

As could be expected from a restaurant named “The Berlin Inn,” the cuisine is German. Neither of us was very familiar with German food and on the way there, we speculated about what they would serve. I had two German roommates briefly in college and I remember them eating a lot of salami and making Beef Stroganoff (of course I only remember them doing this once, so it may have been a fluke). So when we got to the restaurant, it was obvious that a little education was in order. Luckily, our waitress was extremely helpful. The Berlin Inn serves different kinds of Fondue, various pancakes, sandwiches, salads, wursts, schnitzels, and some specialties like Sauerbraten, Swabian Pork Spareribs, and Chicken Cordon Blue. (They also serve breakfast.)

Here are some useful things to know: Schnitzel is a dish where something has been flattened, breaded, and cooked (fortunately, they can make any of their schnitzel gluten-free by breading with potato flour). Wursts are sausages. The Berlin Inn doesn’t have a separate gluten-free menu, but instead their menu has a page that serves as a guide to what on the menu is safe. You can check their menu our on their website. 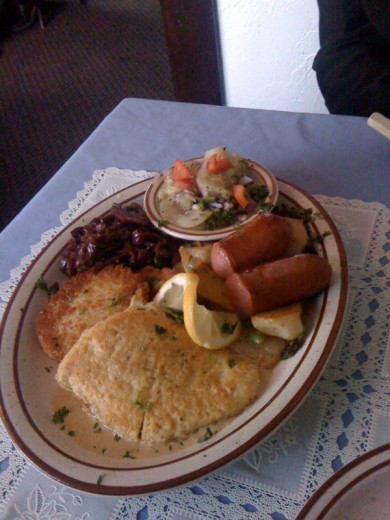 After some debating, we decided to get the Best of the Wurst & Schnitzel platter. Some changes had to be made to make it gluten-free. As mentioned above, the Schnitzel was prepared gluten-free. The platter normally comes with spatzle noodles, which are not gluten-free and which we substituted with crispy potato pancakes. Going gluten-free also limits your sauce choices to a Dijon cream sauce. We weren’t complaining, though, because the sauce was awesome. So we had a Spicy Beer Sausage wurst, Alder-smoked Bratwurst, Chicken Schnitzel, grilled bratkartoffel (fried potatoes with vegetables), potato pancakes, sauerkraut & sweet-n-sour red cabbage.

Our waitress was very familiar with gluten-free issues, and everyone there was very friendly. The restaurant has a cozy atmosphere. Our food came out promptly and everything was warm enough. All was delicious, especially the wursts. Also amazing were the desserts. They have an enormous dessert tray and have a couple of gluten-free desserts. They make a cashew cream torte that is very much like a sweet lemony cheesecake. We also had a molten chocolate cake. Check out these pictures. 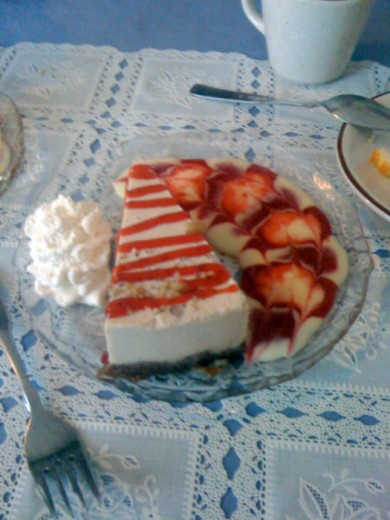 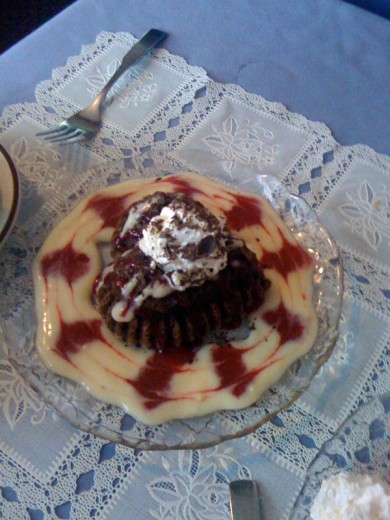 We both thought the torte was good, although I think we would have liked it more if it had been a little less sweet. The molten chocolate cake was really incredible, though. It’s the kind of cake where the outside is crunchy and the inside is still kind of gooey. It’s amazingly chocolaty.

Gluten-Free Safety Rating: Gluten-free friendly but ask questions.
Times we have visited: 1 (So your experience may vary.)
Overall rating: 4 out of 5 stars
Price compared to “regular”: Same.