We discovered Chez Machine Creperie thanks to a great Groupon discount (you could get a $25 coupon for $11). Sienna checked out the restaurant online and found that they offer gluten-free crepes, so it was a done deal. The restaurant is a tiny place a couple of blocks from Powell’s on Hawthorne. It’s really so small that a person could drive right past it. I have to report up front that they cook the gluten-free crepes on the same surface as the normal ones, so if you’re extremely sensitive you should definitely pass on the crepes. On the plus side, our waitress was very friendly and was happy to discuss what was gluten-free and what was not.

Inside, Chez Machin is made up like a cross between a cafe and an Italian restaurant. I think that they were going for French, but the place felt more Italian to me. Maybe it was the checked table cloths. When we went, the place was packed full of happy people and had something of a laid back cafe atmosphere. The crepes here are the more thick kind, rather than the more thin kind that some will be used to. The last time I talked about crepes on this blog, I mentioned that I’m not really a crepe-loving kind of person. To me, especially when they are thick, crepes end up seeming a lot like a “wrap.” Sometimes you might want something like flat bread around your food, and sometimes it’s just a distraction. 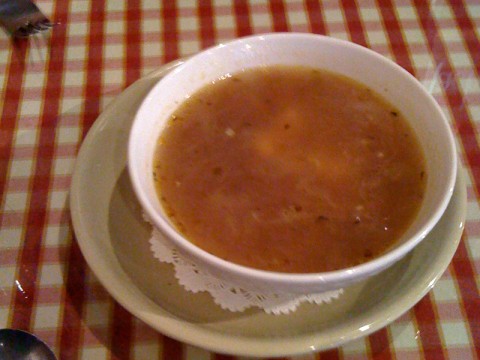 For an appetizer, at the recommendation of our waitress, we opted to have the French Onion Soup, which can be made gluten-free. We both thought it was very good. Make sure you order it gluten-free, because otherwise it comes with croutons in the soup. 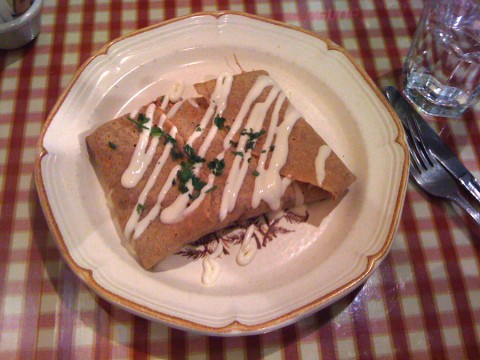 Like most crepe places, Chez Machin has sweet crepes and savory crepes. On the savory side, they have vegetable crepes, meat crepes, and seafood crepes. I got La Percheronne, which is Black Forest ham, brie, avocado, mushrooms, and crème fraîche. Sienna got L’Allemande, which is bacon, pan sauteed potatoes, caramelized onions, scallions, Ementaller Swiss cheese and crème fraîche. (On a side note, their béchamel sauce is not gluten-free. They start it with a rue.) All the ingredients were fresh and the crepes were hot when they came to the table, but neither of us was blown away by our dishes. Once again, that might be in part because we’re just not that into savory crepes. I think the next time we go there, I might try one of their entrees instead of a savory crepe. 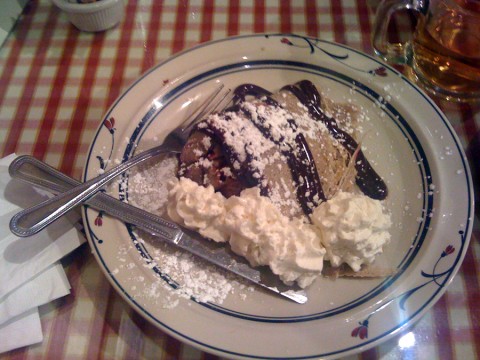 On to the sweet crepes. I got La Mont Blanc, which has local berries, chocolate, and whipped cream. Sienna tried La Compote, which is made with cooked apples and cinnamon with caramel sauce. As with the savory crepes, all the ingredients were good. They got my order a little wrong, but fixed it very promptly. We both really enjoyed our dessert crepes. I really think that crepes are more suited for desserts. Sienna and I had a short conversation about the nature of crepes and why it would be that they seem to work better with sweets. Sienna’s theory is that sweets are more flavorful and so they don’t get as dulled by the crepe. With savory crepes it does seem that the flavors can get lost. 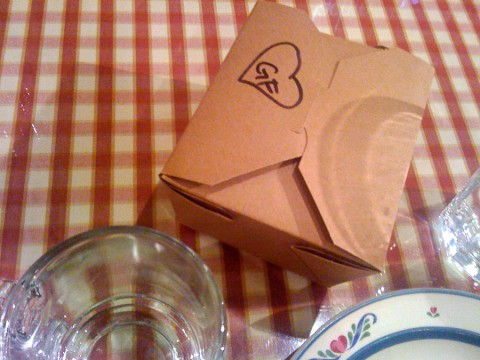 Our newest adventure with crepes ended well, and we both agreed that our experience at Chez Machin was favorable enough that we would be interested in going back sometime soon. Some notes:

Gluten-Free Safety Rating: Unsafe Depending on Your Level of Sensitivity.
Times we have visited: 1 (So your experience may vary.)
Overall rating: 3 out of 5 stars
Price compared to “regular”: $1 more for gluten-free crepe.

We want to know: Do you know of any other crepe places in town that do gluten-free crepes? What is up with the person who writes the descriptions for everything on Groupon? Are they crazy or what? Do you have any opinion about sweet -vs- savory crepes? Let us know!