Thanks to the readers who left comments on Chutney’s comment page linked from our Gluten Free Restaurant List, we’d heard some about their food before we managed to get there. Even without diet restrictions, getting good Indian food has been a real problem for us in Portland, because we’re both used to the really amazing Indian restaurants that were available in Berkeley and San Francisco. We’re both big fans of Vindalho down in SE. Their food is really amazing, but Vindalho is kind of… not the kind of Indian food we’re used to in restaurants. We were excited to try the food at Chutney’s and finally got a chance this weekend. As a bonus, the restaurant is really close to the Regal Cascade 16 Cinema, so we caught the 4 o’clock showing of Inception and then got ourselves some delicious gluten-free Indian food afterward.

The movie Inception was really good by the way. You should check it out! As for the restaurant, we are happy to recommend it. It’s in a quiet little strip mall. The place was about three quarters full of very obviously happy people when we walked in. The decor makes the restaurant look very new, and there is a warm vibe to the place. We had water brought almost instantly, and our waitress was very helpful. She was almost a little too attentive, and made us feel a little rushed. At one point, we got a little worried because she said “gluten-free means no wheat, right?” which is only part right, but otherwise she was able to answer all of our questions. Besides that, were very happy with how attentive and friendly the staff was. 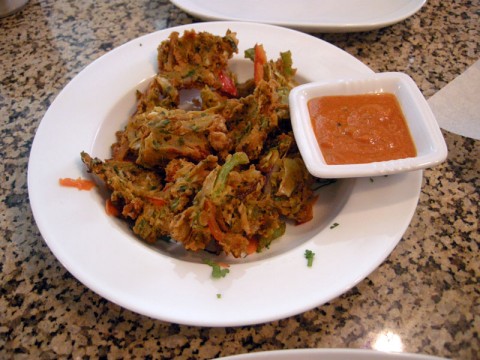 We started with the Mixed Vegetable Pakoras, which are described as “Mixed vegetable fritters dipped in mildly seasoned batter and fried.” These tasted a lot like Samosas, so those of you out there who miss Samosas should check this dish out (sadly, their Samosas are not gluten-free). The Pakoras were so delicious that it took an effort for us to not devour them all instantly.

For entrees, we got the South Indian Dal and Chicken Korma. South Indian Dal is described as “Tomato lentil dal in ginger, garlic South Indian spices.” This is a dish made primarily with yellow lentils and chunks of tomatoes. Dal is one of my favorite things to eat, and we were both very happy with this dish. If we had a complaint, it would be that it was a little watery, which is mostly OK, because you’re just going to mix it up with some rice anyway. The Chicken Korma is described simply as “Chicken cooked in coconut sauce.” This dish was also really good. Like the rest of the food we had at Chutney’s the flavors were complex and delicious. 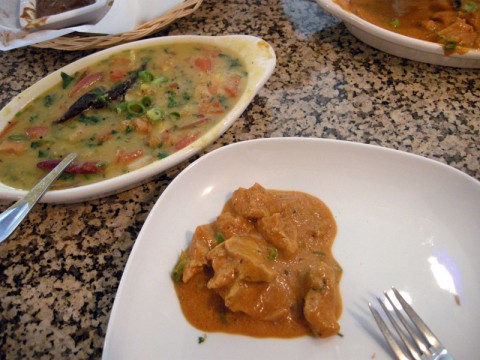 Our only other complaint of the night was that we ordered vegetables with our chicken and they forgot them. On the plus side, when we mentioned this to our server, it was taken care of very promptly. Other than this, our food arrived in a reasonable amount of time, and it was all served warm. Later on in our meal the host stopped by and we had a conversation about rice and food. Her name was Usha (if you’re reading this, we hope we’re spelling this right!!) We asked if they had brown rice available and she mentioned that they can do special things if we were to call ahead. That was nice to know.

Chutney’s was awarded the Best of Citysearch- Portland Metro Area for Indian food in 2009 and it’s plain to see why. Chutney’s is also sitting at number 3 on Urban Spoon’s best 100 list for Portland. Chutney’s is open 7 days a week for dinner, and also does catering. They’re locally owned and operated, and also gluten-free friendly. The food is great, so we say check them out!

Gluten-Free Safety Rating: Gluten-free Friendly but Ask Questions!
Times we have visited: 1 (So your experience may vary.)
Overall rating: 4 out of 5 stars
Price compared to “regular”: Same.

We want to know: Do you have a favorite gluten-free friendly place in Vancouver WA? Got a favorite dish at Chutney’s? What is a donut shop doing at #1 on the Urban Spoon 100 Best Restaurants in Portland list? Let us know in the comments!