We’ve featured pieces of news about Dessert Labs once or twice on Gluten Free Portland. I met with them last week and talked to them about their kitchen, gluten-free food, and what they’ve been up to lately. 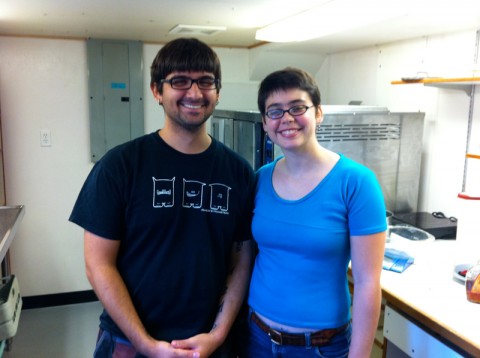 Dessert Labs is Joe Kalal and Karen Goetsch. Joe is the chef, and Karen handles the business side of it. Joe found out that he had celiac while living in New York, and inspired by the horrible gluten-free food he found there, decided that he could do better. He enrolled in the French Culinary Institute in New York City to learn how to be a pastry chef. Since he couldn’t eat a lot of the wheat-based treats that they learned to cook there, he found that he had to concentrate on using his sense of smell instead. To gauge flakiness, crumb, or moistness in baked goods, he would break them open.

Joe and Karen are relatively new to Portland. They came here from New York City by way of the San Francisco Bay Area. They had meant to start Dessert Labs in the Bay Area, but visited Portland in the summer of 2010 and were delighted when everything just kind of magically fell in place. Within days, they fell in love with the city, found a place to live, and found a kitchen space to work out of.

In late spring of this year, they created a Kickstarter project that raised over $2500. If you’re not familiar with Kickstarter, it’s a website that is a place for creative people to find funding for their own projects. In a nutshell, a person can come up with an idea for a project, describe it on Kickstarter, and then other people can fund the project (see here for more details on how Kickstarter works). The people who fund a project generally get something out of it. In this case, Dessert Labs funders got care packages and subscriptions of gluten-free goodies. Karen and Joe set their project goal at $1000 and it didn’t take long before they passed it. When the funding doubled, they knew that they were really on to something.

What they are doing now is providing gluten-free baked goods to local cafes and restaurants. As we mentioned before, they are supplying Food Front on NW Thurman with gluten-free pies for the holidays. They also take orders for gluten-free cookies, cupcakes, bread, cakes, and pies on their website or by phone. They also told me that they are interested in taking special orders for people who would like to get a particular baked good in gluten-free form, including people who may have family recipes that need to be converted. They are vegetarian/vegan friendly.

Fortunately, they had some gluten-free treats for me to sample when I stopped by. 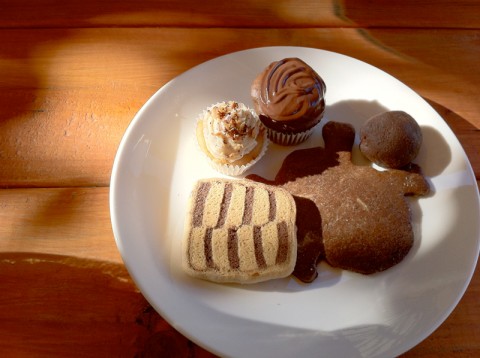 What we have here are some shortbread cookies, some cupcakes, and a ball of flourless chocolate cake. These were all really good and none of them had the funny aftertaste that you sometimes get with gluten-free baked goods. The flourless chocolate cake was my favorite item. Sienna and I both thought their cupcakes were really impressive. We’re both dying to know how their pies are. We’ll let you know when we have more information!