We were a little confused about Gustav’s and the Rheinlander German restaurants. They are listed differently and have different names and websites. So to clear things up: It’s basically the same place with the same menu. Gustav’s is more of a pub atmosphere, whereas The Rheinlander is restaurant atmosphere. Both serve up cocktails and German food. As far as the pub atmosphere goes, it’s barely like a bar or a pub, really. More like a restaurant with a huge bar on one side. We decided to do the pub thing and ate at Gustav’s.

While we’re talking about atmosphere, it would be criminal for us to not mention that there are staff in lederhosen, and that the decor is full-on what you imagine when you think of Oktoberfest. At least that’s the feeling I got. Everyone we talked to at the restaurant were very helpful, particularly our server, whose name was Sara. She was knowledgeable and just: awesome. Gustav’s has a separate gluten-free menu, which they get points for. They also serve gluten-free beer: St Peter’s Sorgham Beer. For the vegetarian readers, I have to say that although they have a separate vegetarian menu, scanning it makes me think that if you’re gluten free AND vegetarian, you should probably steer clear. 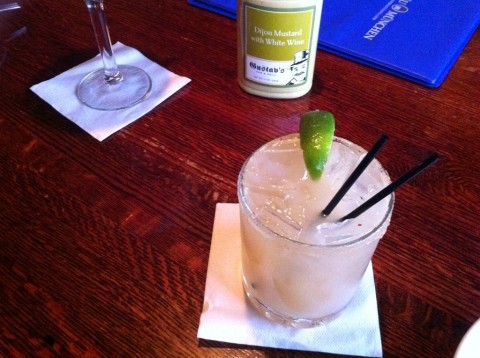 We decided to get some drinks, and that was definitely a good idea. Sienna got the Love for Sale, which is vodka, passion fruit liqueur, pineapple juice and orange juice. This tastes exactly like Hawaiian Punch, but with alcohol in it. I got something called a Sea of Cortez: “Arbol chile infused Herradura blanco tequila, fresh grapefruit and lime juices, triple sec, served on the rocks with an Arbol chile, salt and sugar dusted rim.” This drink is awesome! Spicy, bitter, and sour with some hot chile burn. This photo reminds me to mention that Gustav’s has only one gluten-free mustard, the spicy kind. 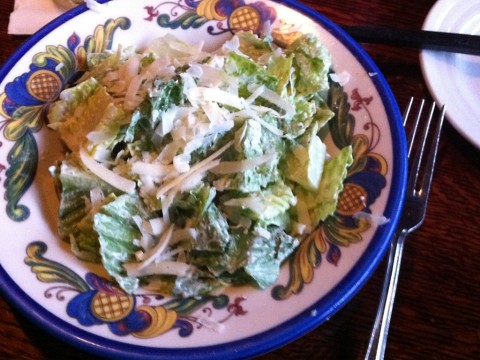 We have to say that our eating experience at Gustav’s ended up being a little lackluster. The Caesar Salad was definitely of the Americanized, mayonnaisey sort. The lettuce was fresh, but the flavors ended up being too monochromatic for us. We were wishing for some more lemon and some bite to the cheese. 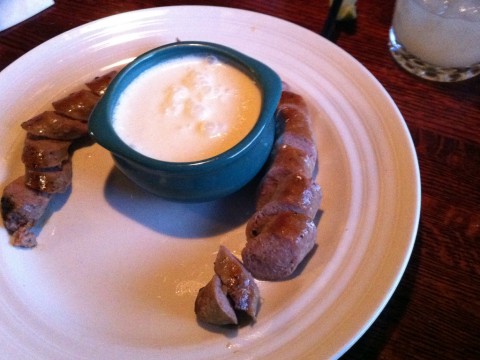 The gluten-free fondue ends up being a little bit challenging. Unlike another place we could name, they don’t serve the fondue with vegetables. Instead, they serve it with two bratwurst sausages. The cheese flavor was good, although we both thought it was too salty. But dipping sausages into melted cheese was a little too hardcore carnivore artery hardening for me. I was really wishing for some veggies or some gluten-free bread pieces. The bratwurst was good, at least as far as we could tell. We’re not really experts in the sausage/wurst area, so your mileage may vary. 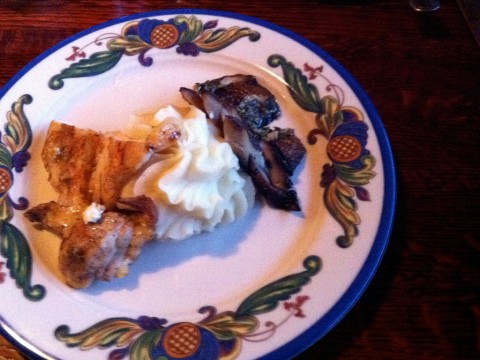 Here is where I explain what a schnitzel is. They take a piece of meat like a chicken breast, pound it flat, bread it, and then fry it. In the case of the Gustav’s gluten-free schnitzel, this simply means that they pound it flat and then grill it. This is the chicken schnitzel with portabella mushrooms and mashed potatoes. The mushrooms were the best part, even though they seemed to have been steamed. The mashed potatoes were OK. The chicken was flavorless and kind of overdone. 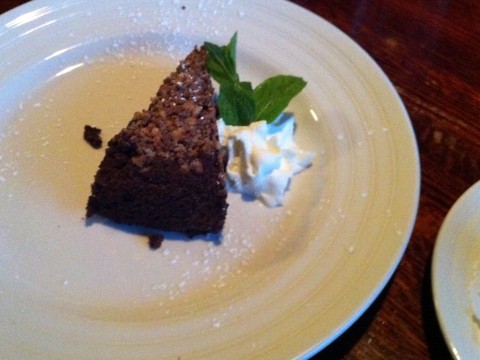 It seems like you can’t throw a rock in Portland without hitting a slice of gluten-free flourless chocolate cake, and I certainly cannot complain about that! Besides the crazy cocktail, the dessert was the best part of our meal. It was creamy, rich, and had this salty thing going on, which I really liked. Gustav’s serves Illy coffee, which we really love and went perfectly with the flourless chocolate cake.

It was at this point that we decided, based on our first experience at Gustav’s, that they are kind of like the Applebees of German cuisine, except with Lederhosen and wandering accordion players. Depending on your tastes, that might be a good thing or a bad thing. We thought that the food, although it was all edible, lacked a spark. If you scroll back up and look at the presentation on all of the dishes, you’ll see the same thing. It’s all really sort of functional. We do, once again, have to comment about how great the staff was, though.

Gluten-Free Safety Rating: Gluten-Free friendly but Ask Questions!
Times we have visited: 1 (So your experience may vary.)
Overall rating: 2 out of 5 stars
Price compared to “regular”: Same