Queen of Hearts Baking Company emailed us recently to invite us to try their gluten-free pies. The owner, Molly Thurston Parker, recently launched a wholesale bakery to sell her pies, which are individual-sized. She sells the pies at the Buckman Farmers Market (SE 20th and SE Salmon, Thursdays, 3-7pm), at Salt Fire and Time Community Grocery on NW 24th Ave, at Pacific Pie Company on SE 7th, and at Flying Cat Coffee Shop on SE Division. When you go to the Buckman Farmers Market, it’s usually Molly who is there working the booth. 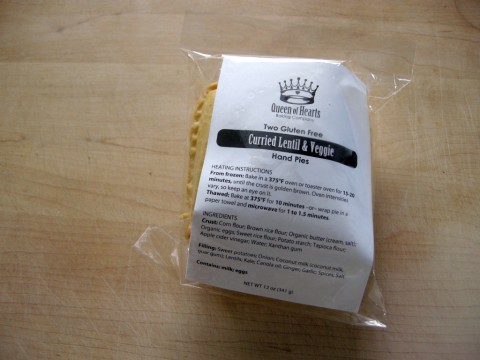 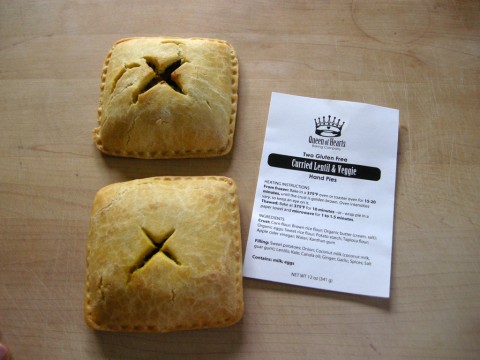 The pies come packaged in twos. Each pie is an individual meal, and all of them are basically vegetarian. The instructions for cooking are quite simple. You can start from frozen or thawed, but basically you bake them in an oven at 375 degrees F until the crust is golden brown. We ate both the savory pies with some sauteed veggies, but they would also probably be great with a side salad.

Considering we’re talking about pies here, the most important consideration is going to be the crust. The Queen of Hearts crust is really excellent and amazing! It’s the exact kind of crisp and flavor a person wants from a pie crust. We were both really enamored of them, especially because so many gluten-free crusts are so disappointing.

We both also agreed that we liked the savory pies more than the dessert pies. The Curried Lentil and Veggie pie is filled with sweet potatoes, onion, coconut milk, lentils, kale, ginger and spices. Like most curries, we found that the flavor and experience was better with some yogurt on the side to offset the curry. It would probably also be really nice with a chutney. If you’re a curry fan, then these are a real treat. 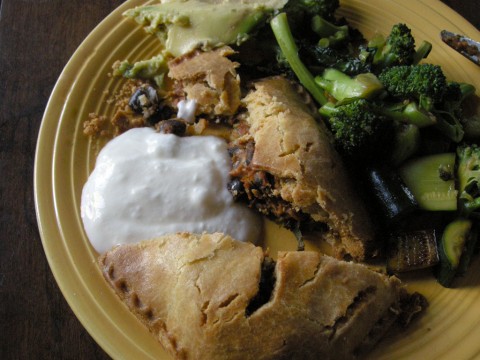 Our favorite pie was the Black Bean & Pepper Jack Cheese pie. Besides the two ingredients in the name, these pies have tomatoes, green chiles, onion, spices, and pepper flakes. Besides broccoli, we added some yogurt here, too (instead of sour cream), and some avocado. These pies have a great flavor and are the perfect level of spicy. 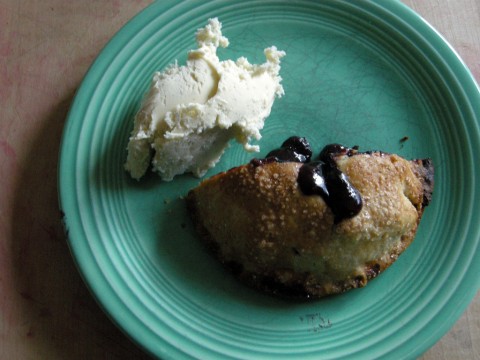 As mentioned earlier, we thought that the dessert pies were just OK. Pictured above is the Mixed Berry pie paired with vanilla ice cream from Portland’s own Fifty Licks. This pie is made with blueberries and marionberries. The Hazelnut & Apricot pies are filled with hazelnut frangipane and apricot preserves, which incidentally contained corn syrup, which we found a little confusing, considering that Queen of Hearts obviously tries to use healthy ingredients in their pies. The dessert pies were a bit bland. This might be one of those cases where the crust is kind of taking the edge off of the ingredients. We both found ourselves wishing that the pies were more tart, or maybe more sweet.

Our final verdict: We really enjoyed the savory pies and think that if you’re looking for something new, interesting, and gluten-free to take home and bake one night, you should give Queen of Hearts a try. Sweet pies are really subjective, so I’d be really interested to hear from any of our readers who have tried Queen of Hearts. Let us know in the comments!

Gluten-Free Safety Rating: Gluten-Free
Times we have visited: 2 (So your experience may vary.)
Overall rating: 3 out of 5 stars
Price compared to “regular”: not certain