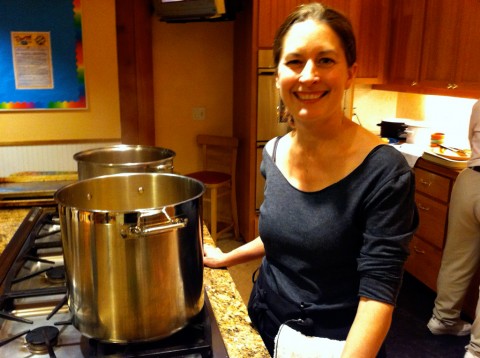 If you haven’t been to a cooking class at Bob’s Red Mill, the format is less participatory and more like watching someone cook while they give you tips on how to be successful with the dishes. Everyone is given a handout with recipes for the dishes being prepared. At the front of the class there is a large island with burners and cutting boards, where the cook does their work. On either side of the island, hanging from the ceiling, are two monitors which show a view from above the cooking area, so that you can see what’s going on inside the pots while the food is being prepared. As the dishes are finished, samples are handed around to everyone in the class. Also, audience members are encouraged to ask questions, and the crowd this night was very inquisitive.

We recently attended the aforementioned gluten-free soups class at Bob’s Red Mill. The class was taught by Laura B. Russell, the author of The Gluten-Free Asian Kitchen

, which we are currently working our way through. The other upcoming gluten-free class happening there is a desserts class with Crave Bake Shop’s Kyra Busanich (see here for details). More information about Laura B. Russell is available at her website, www.laurabrussell.com. She also writes a monthly column for the Oregonian’s Food Day section called “Gluten Freedom” (click here for a list of previous columns), and is also a contributor to Portland’s MIX magazine and to Easy Eats and Living Without magazine. 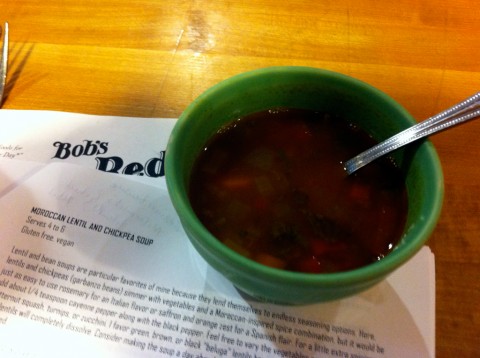 The dishes included in the handout were: Moroccan Lentil and Chickpea Soup, Creamy Curried Millet and Vegetable Soup, Brazilian Cheese Puffs, Eastern-European Style Mushroom and Buckwheat Soup, Wild Rice Soup with Smoked Sausage, and Peruvian Quinoa Chowder. We got samples of the first four of these dishes, and they were all really delicious. The Moroccan Lentil and Chickpea Soup was my favorite. It’s got an amazing ginger, cumin, and cinnamon spice blend, and features fresh mint added at the end. The recipe for this dish can be found here at Russell’s website. This recipe happens to be vegan. A bunch of the recipes on her site are vegan/vegetarian friendly. 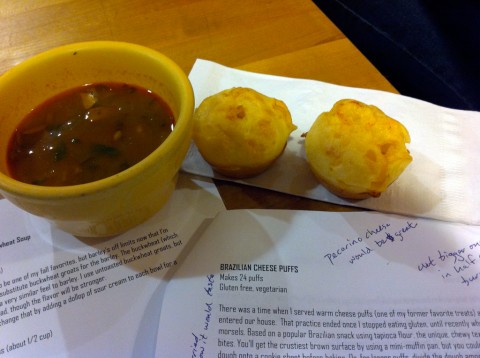 The items that prompted the most questions and discussion were the Brazilian Cheese Puffs. Fortunately, the recipe for this dish is also available at her website, here: Brazilian Cheese Puffs. Russell noted that a person could make larger sized puffs and use them for hamburger buns, or make smaller sized puffs and then stuff them to create hors d’oeuvres. She also noted that the most important ingredients are the tapioca flour, the milk, and the eggs. So a person could change up the cheeses used, and also try different milk substitutes.

During the break we went up and introduced ourselves. We had some questions about a recipe that we had tried out of the Gluten Free Asian Kitchen book. Russell was very friendly and was happy to have a long discussion about cooking dumplings with us. After the class, she was available for more questions and also to sign copies of her book.

We thought that this was a fun and rewarding class and would encourage anyone out there who is interested in food or cooking to check out the classes at Bob’s Red Mill. Upcoming classes can be found listed here. Note that not all of their classes are gluten-free. This one wasn’t really billed as a gluten-free class, but everything in it was gluten-free. If you wanted to attend this class but missed it, we were told that this class and the desserts class taught by Kyra Bussanich will be repeating in February. You can reserve a spot now by calling Bonnie at Bob’s Red Mill 971-206-2208 (Mon-Fri 8:00 AM to 5:00 PM).