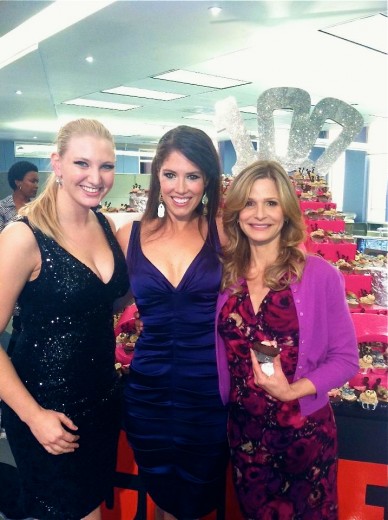 Good news! Portland’s own Kyra Bussanich of Crave Bake Shop has won Cupcake Wars on the Food Network. Kyra is pictured here with Kyra Sedgewick (on the right) and assistant Jackie Schonbrun (on the left). Our congratulations go out to her for the victory. Thanks also for helping raise awareness of gluten sensitivities and celiac disease. Here is the press release. Note that the show is scheduled to be rebroadcast, in case anyone out there wants to check it out.

The Challenge: Pastry chef Kyra Bussanich, owner of Crave Bake Shop Portland, OR the first baker from the Northwest—and first Gluten-Free pastry chef anywhere—to win Cupcake Wars, highly rated show on The Food Network. She competed on taste, texture and appearance against traditional bakers who had no restrictions on their ingredients.

What’s at stake: Chef Bussanich was the first ever gluten-free baker to compete on the show in December 2010. Though judges crowed about her baking, she came in 2nd place.
A year later, she was asked to compete again on the episode titled, “The Closer 100th Episode.” As the winner, selected from 4 bakers who had all previously competed, Bussanich catered a party celebrating the 100th episode of the hit TV show, The Closer, starring her namesake, actress Kyra Sedgewick.

Book and media appearances: Bussanich has appeared on several TV shows (in Portland and been interviewed in several newspapers and magazines and ezines (Oregonian, Gluten-Free Living). Bussanich is currently writing a book on gluten-free baking and lifestyle for Ten Speed Press, an imprint of Random House.

About Kyra: Portland native, lives in Lake Oswego. Graduated from University of Puget Sound in Tacoma. Then, after being diagnosed with an auto-immune disorder, she was forced to switch to a wheat- and gluten-free diet. Motivated to make high-end pastries that she could enjoy, Bussanich graduated with honors from the prestigious Le Cordon Bleu Patisserie program in Portland. Disappointed with most of the gluten-free pastries and cakes available on the market, Bussanich began experimenting with alternative flours and developed recipes that matched her dietary needs without compromising any of the classic bakery tastes and textures.