We heard about it first on our Facebook group page. SUBWAY has been in the gluten-free news for a couple of months by starting to provide gluten free bread (and brownies?) at their restaurants. We have yet to try the sandwiches, but have heard good things about them. They are also going to great lengths to educate their employees about gluten free issues and to prevent cross-contamination. For these things, I can only be grateful. Here’s a press release they sent us recently:

For the estimated 16 million Americans with gluten sensitivity, eating out can pose a real challenge. Now Oregonians can kick off the New Year with new choices, when SUBWAY restaurants across the state begin offering gluten-free sandwich options and gluten-free brownies as regular menu items after a successful test in Portland and Bend this summer.

Oregon is one of a handful of states to offer these alternatives, based on its reputation for mainstreaming food trends that might be niche alternatives elsewhere. When Subway’s Oregon stores had the highest average number of gluten free rolls sold during the test, it was clear that gluten-free foods are popular locally.

Gluten’s ubiquity can present a challenge for many families and work groups as they try to coalesce around a restaurant choice.

SUBWAY’s wheat-free sandwich rolls and brownies are produced in a gluten-free facility and are individually packaged. SUBWAY sandwich artists are trained to prevent cross-contamination during the sandwich-making process. For example, one employee will prepare a gluten-free sandwich order from start to finish. Other techniques include single-use knives and eliminating contact between traditional sandwich rolls and other ingredients including meat, cheese and vegetables. 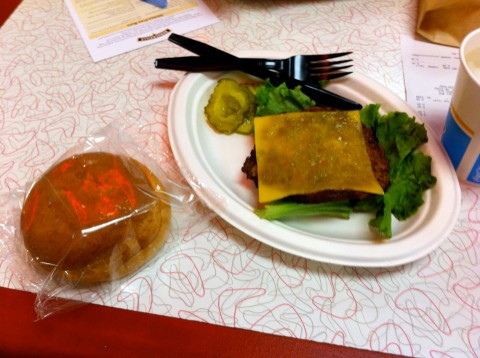 Speaking of fast food, Burgerville, Portland’s much-loved burger chain, has come out with gluten-free buns that they are testing at two restaurants locally (25th & SE Powell in Portland and Fisher’s Landing in Vancouver). We went to one of the restaurants to check it out ourselves. As you can see from the photo above, the bun is delivered in a wrapper to help prevent cross-contamination. We were also handed a questionnaire to fill out. 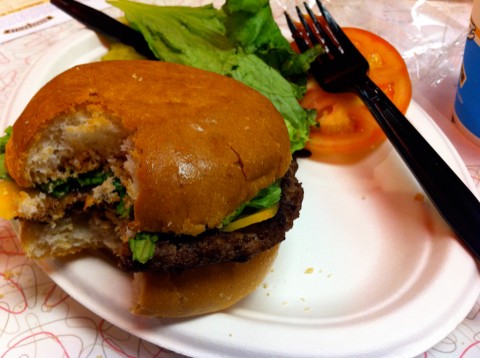 After having heard so much about Burgerville from people we know, we were unprepared for how unappetizing their burgers were. The patties were overcooked. We both felt like the bun, which is produced by Udi’s in Colorado, did not compare well to the buns you can get from Jensen’s. The buns were dry, crumbly, and generally unappetizing. Of course, since the buns were being served in a package, there was no way to toast them, so I guess that would be expected.

On the plus side, the staff was extremely friendly, and the food came out fast. On the minus side, the restaurant was freezing cold. Did we mention that the burger patties weren’t very good? If you want to try them out yourself, Burgerville will be testing these buns until January 12, so you still have a few days left to try them.