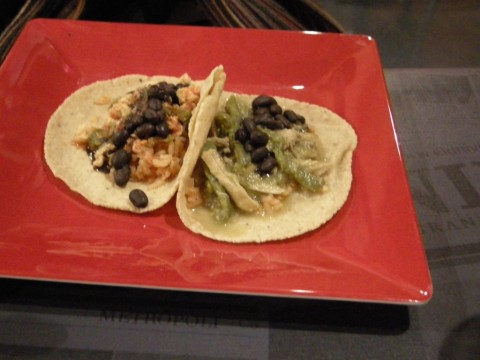 Mi Mero Mole is a Mexican street food concept restaurant created and run by Nick Zukin (the Zuke in Kenny & Zuke’s). When you enter the SE Division eatery, you’ll find a blackboard with the day’s “guisados”: three choices of meat, a seafood option, two vegetarian options, and one vegan dish. You pick the guisado (which is a stew or filling) and then choose what format you’d like your guisado served in. You can get them in the form of tacos, plates (platos machos), burritos, and quesadillas. 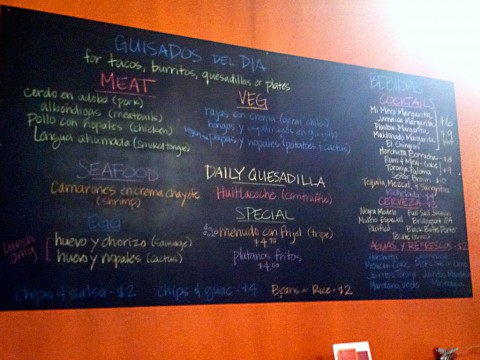 Here a taco is the most basic, consisting of a guisado with rice on a corn tortilla. Platos Machos is about the same except you get chips, rice, beans, and two tortillas. Burritos are off our menu because they use wheat tortillas (sorry). As many of our readers can probably guess, a quesadilla is about the same as a taco, just add cheese and give it some time on the grill. Some examples of guisado choices from the board: Pork in adobo, meatballs in a chipotle-tomato sauce (the meatballs aren’t gluten free), chicken with cactus in a tomatillo sauce, smoked tongue, shrimp in a cream sauce, poblano chiles in a sour cream and cheese sauce, mushrooms and asparagus in a red chile and cream sauce, and the vegan potatoes and cactus in chipotle and tomatillo sauce.

Care has obviously been taken to present adventurous street fare, as the menu includes tongue, blood sausage, rabbit, and even duck. The printed menu is marked for gluten, vegetarian, vegan, and different levels of fire. The atmosphere is an exact cross between a hipster gastro pub and a Mexican hole in the wall. So the seating format screams Mexican restaurant while the music playing is on the hipster/alt side. You order at a counter, but the lighting is subdued. 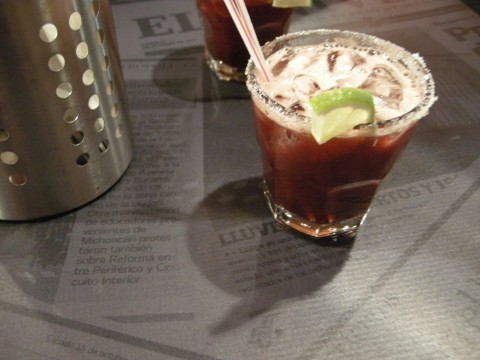 We liked the atmosphere, although to me, Mi Mero Mole seems more like a place to grab some tacos on your way to something else. Probably because of the format: You order at a counter and sit down. The food is brought to you very quickly. Besides chips and guacamole, there aren’t really appetizers. The only thing that says “stay a while” to me are the cocktails and beer. Like the guisado menu, the cocktail menu is very interesting. The drinks are strong. There are also aguas frescas, and the horchata is sweet and heavy on the cinnamon.

The staff is very friendly and helpful. As mentioned, the food comes out quickly and is a good temperature. The ingredients seem to be fresh. The times we’ve visited, Zukin himself was bringing out the dishes and talking to people in the restaurant. 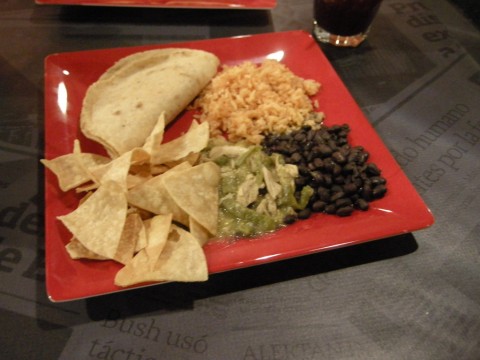 The chips are awesome and seem house made. The tortillas are fresh and delicious. The salsa choices are good. The guacamole is disappointingly tame, and could benefit from garlic and lime juice. We have tried a bunch of different guisados. The egg ones we found too salty, but everything else we have tried has been great. I’m pretty sure that the pork in adobo is our favorite, but we are also partial to the chicken and cactus, and the vegan cactus and potatoes. Fans of fried plantains will love the Mi Mero Mole version, which is served with a sauce made from Mexican sour cream, sugar, and cinnamon.

Google translate tells me that Mi Mero Mole translates to “My Mere Mole.” Mole is pronounced like “Ole!” but with an M, and means “a mixture.” I’m thinking that in this case, Zukin was thinking “my simple mix” and that is indeed what the restaurant is. If you’re looking for a no fuss, no muss, inexpensive Mexican taste treat on a weekday night, it’s going to be pretty hard to go wrong with a place like Mi Mero Mole.

Gluten-Free Safety Rating: Gluten-Free Friendly but Ask Questions
Times we have visited: 3 (So we feel pretty good about the rating.)
Overall rating: 4 out of 5 stars
Price compared to “regular”: same