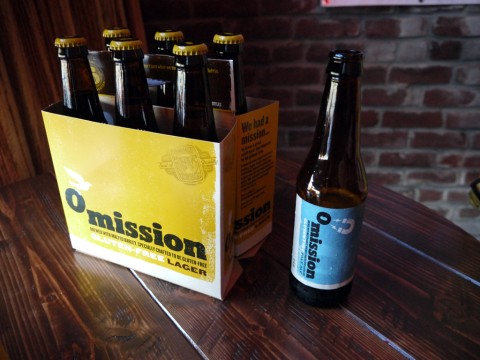 It is admittedly infrequent that the paths of a beer maker and gluten-free blogger cross. I do get invited to events here and there, and the first of 2012 happens to be the press event for Omission beer. Omission beer is made by Widmer Brothers, a division of Craft Brew Alliance, both of which are Portland-based. The event was hosted by Saraveza, which, judging from the menu, is definitely not a gluten-free friendly place, but which has a great little spot around the corner for events like this. 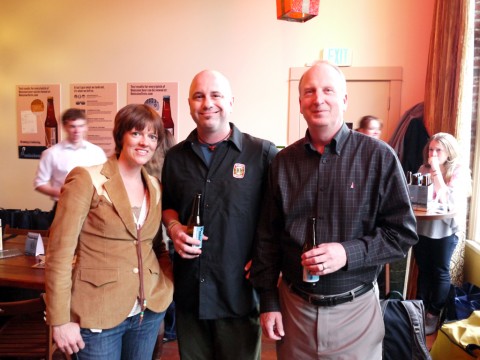 The event was made up of PR people, local bloggers, local media, and some folks from Widmer. I brought along the Gluten Free Portland official beer correspondant, Heather Marsh. Pictured above are Mieke from Tula Baking (who provided some of the treats for the event), Widmer brewmaster Joe Casey, and the CEO of Craft Brew Alliance, Terry Michaelson. Casey’s wife is celiac, as is Michaelson. We spent some time talking with both of them, swapping stories about trying to find places to eat while travelling, and comparing notes on favorite restaurants and bakeries in town. 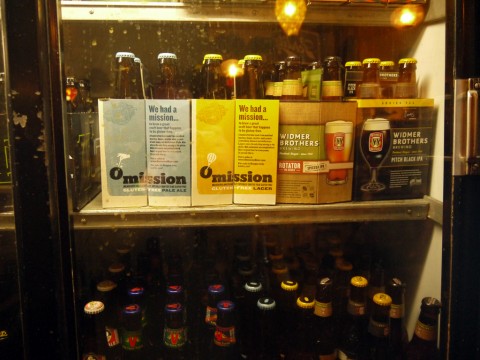 It’s nice to walk into an event where the first thing that happens after introductions is that someone puts a beer in your hand. I was really curious to see what the beer tasted like, and had one of those “oh yeah, that’s what that tastes like, I had forgotten” kind of moments when I had a drink of the Omission Pale Ale. It had literally been years since I’d had a real pale ale, but I could have told you what I was drinking without having to check the label.

About the Brewing Process

The company notes that Omission was six years in the making. It’s unique in that the beer is brewed with normal beer-making ingredients like malted barley and hops, and the gluten is removed during the process. Then the beer is batch-tested by an independent lab to make sure that it falls below the international standard of 20 ppm of gluten (the company claims that they go further and test to 6 ppm). Neither Casey nor Michaelson were willing to go into the nitty gritty details of how they remove the gluten, but would say that “it’s complicated”. 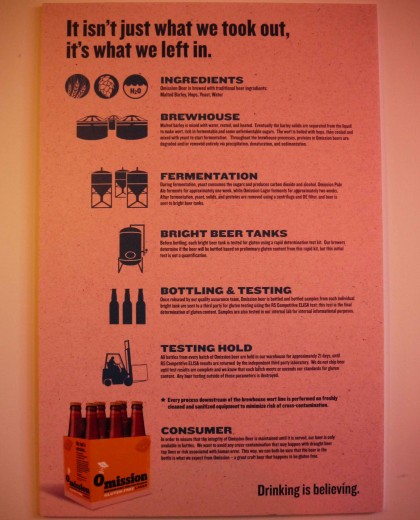 One of the posters at the event went into further details, saying “Throughout the brewhouse process, proteins in Omission beers are degraded and/or removed entirely via precipitation, denaturation, and sedimentation.” And later, “After fermentation, yeasts, solids, and proteins are removed using a centrifuge and DE filter…” (I’m thinking that it’s pretty safe to take the words “proteins” in these two sentences and substitute “gluten and other proteins.”) Before they bottle it, the beer is “rapid tested” for gluten in the bright beer tanks. The beer is then bottled and sample bottles are sent out for independent gluten testing using an R5 Competitive ELISA test. 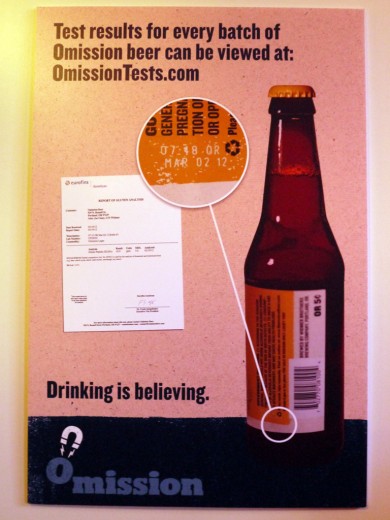 Omission is not yet available outside of Oregon. Widmer plans to begin distributing the beer nationwide as soon as the necessary details are worked out with the TTB (the Alcohol and Tobacco Tax and Trade Bureau of the U.S. Dept of the Treasury). As many of our readers know, the FDA is still getting its act together about all things gluten-free, so there’s not much going on there. With any luck, people outside of Oregon will be drinking gluten-free lager sooner rather than later.

Also mentioned at the event, Widmer is working to expand their gluten-free offerings to include more varieties of beer. They don’t seem to have any plans to supply the beer in draft form, which makes sense because of the risk of cross-contamination from the lines.

How Does it Taste?

With Omission, I think that Widmer is going to have a hit on their hands. Both Heather and I thought that the Omission Lager was good, but both of us preferred the Pale Ale. I asked a bunch of the beer bloggers in the room what they thought, and everyone agreed that the beer was good. One person noted that the pale ale was just a little sweet. Nobody I talked to thought that there was anything funny or strange about the taste.

In this case, saying that “it didn’t taste funny” is akin to attending a Cirque du Soleil show and declaring that the performers “somehow managed to totter across the stage with their crutches.” But considering that we’re talking about gluten-free beer, it needed to be said. As I mentioned above, I had one of those moments where I tasted the Omission Pale Ale, and remembered drinking other pale ales years ago. I’m not an expert, but to me Omission tasted crisp, flavorful, and well-balanced. We were given lots of samples on our way out the door, so hopefully soon we’ll have a more thorough report from Heather and her cohorts.

Look for Omission at your local retailer. You can also go to the source, the Widmer Gasthaus on North Russell. They have recently expanded their menu to include plenty of gluten-free items. We plan to visit soon and will certainly post the results here. Thanks to Widmer for the free beer!