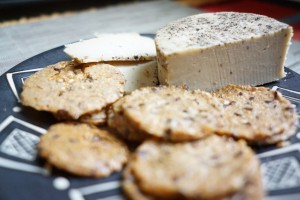 I grew up in a household with a father who was in new product development for a major mass-market distributor. In the early 1980s said company was considering acquiring a gourmet cheese company. There was suddenly a second small fridge installed in our kitchen, which for several years was stocked to the brim with high-end cheese from all over the world. It was a veritable wonderland of cheese.

There are few things that I really miss in my diet, even though I don’t eat gluten, dairy, and almost all processed foods. The exception is cheese. Now don’t get me wrong, I don’t miss it enough to eat it when I know it will cause me symptoms (stuffy nose and acne, for the record), but I can wax nostalgic upon occasion when I’m at a party and there is a beautiful cheese spread.

Over the last few years there have been several new ‘artisan’ dairy-free products that have popped up on the market. I’m always wary of dairy substitutes (more than gluten substitutes) especially vegan cheese because frankly they’re usually pretty nasty.

Not nasty. Unbelievably good. At our local food coop (People’s in SE PDX) they carry both the hard Treeline vegan cashew cheese and the spreadable cheese. Both are excellent. Both actually taste like cheese (caveat, I don’t eat real cheese so take that into account.)

Available at People’s Coop in Southeast Portland. 21st and Tibbetts. Open to the public.

I’ve been serving the hard cheese at parties with Mary’s Gone Crackers, quince paste and marcona almonds on the side. 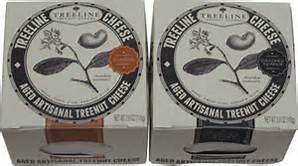