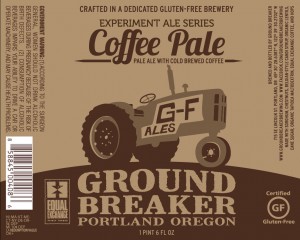 Ground Breaker Brewing is pleased to announce the release of their Spring seasonal, Coffee Pale Ale. To create this beer Ground Breaker started with their award-winning Pale Ale and then added cold-brewed coffee from Equal Exchange rather than the typical dry-hops. Coffee Pale Ale comes in at 30 IBU and 5.5% ABV.

The combination of Equal Exchange’s Medium Peruvian roast coffee with our Pale Ale was selected as the winning combination by the guests in our pub. “Having our own pub gave us the ability to try several coffee/beer combinations and get an immediate response from our fans,” said Ground Breaker’s head of R&D, James Neumeister. He continued, “We had assumed that blending coffee with our Dark Ale would be the obvious winner but no other coffee beer we made matched the positive response we received using this pale ale and coffee combination.”

For the release Ground Breaker will be offering a flight that includes three pub only beers.  The second beer in the flight is Vanilla Cream Coffee Pale Ale, a small batch of Coffee Pale Ale that has vanilla beans and milk sugar. The final two beers in the flight are brewed with teas from The Jasmine Pearl Tea Company.  Dancing Dragon Pale Ale uses a puerh tea blended with sarsaparilla, roasted yerba mate, and honeybush. Ruby Nectar Pale Ale uses an herbal tea that is a blend of organic greenbush, organic hibiscus, organic peppercorns, bee pollen, natural flavor, grapefruit essential oil, and stevia. Coffee Pale Ale will be released at The Ground Breaker Gastropub during an event with Equal Exchange on January 15th from 5 pm until 8 pm. Equal Exchange will be providing chocolate to taste with the Coffee Pale Ale flight.

Equal Exchange, a pioneer in Fair Trade since 1986, is a full service provider of high quality, organic coffee, tea, chocolate and other foods to customers across the United States. 100% of Equal Exchange products are fairly traded, benefiting more than 75 small farmer co-operatives in 40 countries around the world. Beans for this Coffee Pale Ale come from Peru, where Equal Exchange has partnered with Cooperativa Nor Andino for nearly 15 years.

About The Jasmine Pearl Tea Company

Since 2004 The Jasmine Pearl Tea Company has been importing and handcrafting specialty loose-leaf tea blends in Portland, Oregon. Their specialty is providing the highest quality teas and herbal tisanes to gourmet retailers, restaurants, spas and individuals. Most of their teas are harvested and blended in small quantities, which allows them to share the freshest rare and seasonal teas. The Jasmine Pearl Tea Tasting Room is located at 724 NE 22nd Avenue, Portland, Oregon.