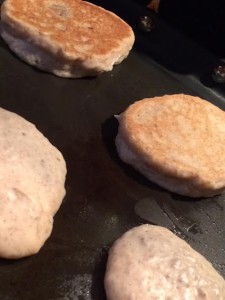 My husband and my eight-year-old are the pancake people in my house so I had them do the cooking and taste test when Eric and Triann sent me a bag of pancakes to try out!

Overall they called it a thumbs up.

The recipe was simple as you only need to add oil and water, great for a weekend morning when we were excited to get out of the house to kick the soccer ball around.

The pancakes themselves cooked up ‘puffy’ but I wouldn’t describe them as ‘fluffy’ as they were quite dense. We ended up adding a little extra oil (we used safflower, Dr Samantha said she would have used coconut oil) and water after the first batch because the batter was so thick. Even with that that they didn’t bubble with cooking as pancakes usually do. This didn’t seem to affect the cooking at all though. They developed a crispy outside which we really liked (you can see that in our photo to the left.)

The color was good and  they didn’t burn when they crisped up. I thought the taste and texture was more like a scone or dense doughnut, which was yummy but not my preference for pancakes. That’s strictly personal though. My 8-year-old loved the doughy texture and sweet taste. Overa 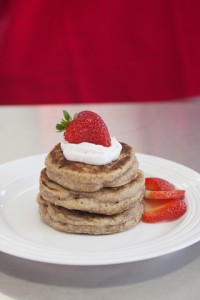 ll a thumbs up. Thanks Eric and Triann for sending it. We’re looking forward to adding it into our rotation.

PS I got a chance to connect with these guys again at the GIG fair this week and realized that we never hit “publish” on this post when we wrote it months ago! Apologies to the folks over at Triann Pantry. I’m looking forward to trying the other bags of mix they gave me this weekend.