We’ve been really excited over the past couple of months about how many places here in Portland Oregon now offer gluten-free pizza! It’s really amazing, and would appear to mostly be thanks to one company, Nugrain Foods. Virgo and Pisces is one of the few places that make their own gluten-free pizza crust. Unfortunately, that’s about all I can say about their pizza right now because I didn’t try it during our visit to Virgo and Pisces.

Virgo and Pisces is located on NW 21st Street at Glisan, so it’s located in quite a hot-spot. They’re just a half a block away from the New Cascadia Traditional Bakery and Trader Joe’s. We went there at 7:00 PM on a Friday night. 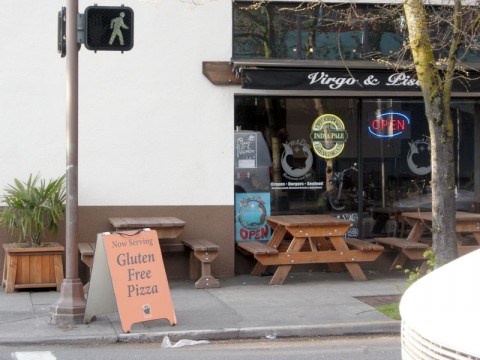 Being in such at hot-spot at 7:00 PM on a Friday night, we were worried that we would have to wait before we could sit down. On the plus side, that was not the case. On the minus side, the place was practically empty, which I never take as a good omen.

Virgo and Pisces is a bar and restaurant. One room is the bar and the other the restaurant. On one end of the restaurant room there is a small area where bands play. It looks like they have live music there on a regular basis, and as we ate, a band was setting up. We left before they started up, though (not because we weren’t interested – we usually love live music. We had a prior commitment.)

The space is nice. Our waitress was extremely helpful and the food came out promptly. Our one big complaint with the atmosphere was the music. The music playing in the bar was different from the music in the restaurant. That wouldn’t normally be a problem except that the music in the bar was turned up a lot louder, so we were treated to both at the same time. I find listening to two different pieces of music simultaneously to be jarring and annoyingly distracting.

Sienna got a hamburger (which was not gluten-free) and I ordered the fish and chips. I’ve been on quite the fish and chips jag (what with our recent review of the Starfish Gluten Free Battered Cod, the gluten free fish and chips at Hugo’s Restaurant in Los Angeles, and the gluten free fish and chips at the Hawthorne Fish House, we’ve been looking really seriously at battered and breaded fish. So I figured it would be worth doing. (By the way, Gina over at Gluten Free Gourmand has an excellent review of the Starfish Battered Halibut and Haddock.) At one point we had the idea that Virgo and Pisces had gluten-free pasta, but that is not the case. Virgo and Pisces also has gluten free beer. We’ll have to go back for their pizza sometime too. 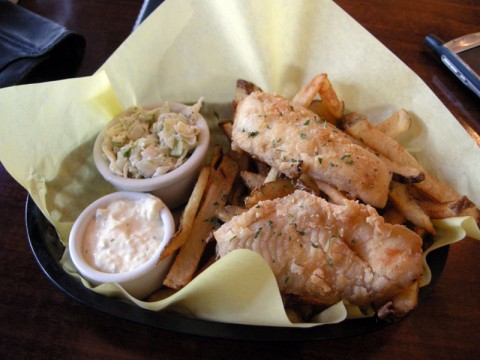 So how was the food? The food was good. It was pretty standard bar food kind of fare. If I had to come up with a word to describe the food it would be “functional.” The thing with bar food is very often you’re really there for something else, like some live music, or to knock back some drinks with your friends. Very often bar food is just background filler, even at bars that are known for their food. The food at Virgo and Pisces is like that. The fish was tilapia. I usually love tilapia, but in this case it was a little tasteless. The fries were a hair too mushy. The coleslaw didn’t turn me on, but I’m not really a coleslaw fan. Sienna’s burger was good.

And that, dear reader, is about all I have to say about this place. I am curious about their pizza, but considering the place was empty on a Friday night, I don’t have big dreams about it. Maybe the place fills up once the music starts?

We want to know: Have you had the pizza at Virgo and Pisces? Let us know in the comments!

Times we have visited: 1 (So your mileage may vary.)
Overall rating: 2.5 out of 5 stars
Price compared to “regular”: Same

Finally! A Portland-specific gluten-free food review: The Mississippi Pizza Pub in Portland Oregon is now making gluten-free pizza, and I’m going to say up front that both of us thought that their pizza was OK. They offer this pizza both at the restaurant and in a “take and bake” form. We opted for the take and bake. That’s because we are much too cool for the kind of speed-of-light gentrification and further boutique-izing that the Mississippi area has been going though (ha ha only joking – but really isn’t it an amazing change from just three years ago?)

On their website, the gluten-free page says that you need to call ahead the day before to order their special crust, but the person we talked to said that it was no longer necessary. If you go to their gluten-free page you will see that they are very serious about being gluten-free. For instance, they have put in a whole separate pizza oven just for the gluten-free pizzas. We think that’s awesome.

In addition to pizza, they also have gluten-free beer and other various alcoholic beverages, and live music almost every night of the week. There is, of course, a gotcha or two. Gotcha number 1 is that they only make the gluten-free crusts in 16 inch form, which we don’t think is a huge problem. Gotcha number two is that the gluten-free pizzas are two dollars more than the regular ones, which is a bummer, but more reasonable than we’re used to for gluten-free fare. But how about the pizza?

We got what we call the “Dave and Sienna special.” It has red pizza sauce AND pesto with extra garlic on the whole pizza and then half mushrooms (for Sienna) and half black olives (for me.) No cheese. Like I said, we did the “take and bake” option where you put the pizza in the oven following their directions. The pizza was awesome. They put the right amount of sauce on the pizza, and didn’t skimp on the ingredients. I know you’re all like: “Yeah OK but THE CRUST Dave, get on with THE CRUST!” So I will get on with the crust. The crust was good. It is definitely more like the kind of crust that is kind of short and a bit crumbly. It was also definitely crunchy. It was almost what I call a Long Island style crossed with a deep dish style. To say what it wasn’t: it wasn’t chewy or bready, which for us was just fine.

Being used to gluten-free pizza crusts that either have a texture like extruded foam, and/or come out of the oven rock hard, we were delighted. While they do make wheat pizza there, they also seem to take enough care to prevent cross-contamination that a person with gluten allergy should be OK (depending on how bad your allergy is, obviously.) We will definitely go back there sometime in the future to do a more complete review of the restaurant itself.

Times we have visited: 2 (So we feel pretty good about our rating.)
Overall rating: 3 out of 5 stars
Price compared to “regular”: Somewhere around 11% more expensive