Among other Portland bloggers, we were invited to an event to celebrate the opening of a Veggie Grill in Beaverton, Oregon. Both of us have been vegetarian and vegan in the past, and we definitely do our best to add veggie-friendly info to Gluten Free Portland, so we were really happy to be invited. Here is part of the invitation they sent us:

We didn’t know exactly what to expect, but the website makes it look kind of like a more pricey vegan American fast food joint. That is pretty much what we discovered when we attended the event. I also heard it described as “vegan American comfort food” but it’s definitely not “comfort food” in the collard greens & grits sense of the word. So yeah, I’m going to stick with more pricey vegan American fast food joint. They are a chain that started in Los Angeles, and there is one in Seattle as well. Comparisons to Chipotle, Baja Fresh, and/or Noodles & Company would definitely be fair. 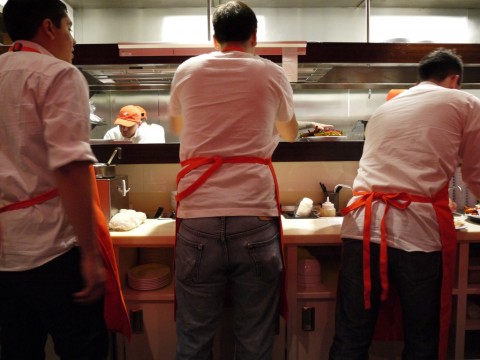 The place was clean, the help was friendly, and the food arrived very quickly. The decor is slick and the restaurant has an upbeat and energetic vibe. Basically the entire menu is salads and various kinds of veggie burger. And here’s where we introduce the unfortunate fact: we’re not really going to be the core audience for the Veggie Grill. The sandwiches are served on wheat buns and the vegan chickin’ and veggie-steak meat substitutes are made with wheat (among other ingredients). The burgers can be served on a bed of kale, and they do have tempeh, so that opens the options up a little bit, but really, almost everything on the menu needs some fiddling to make it gluten-free. 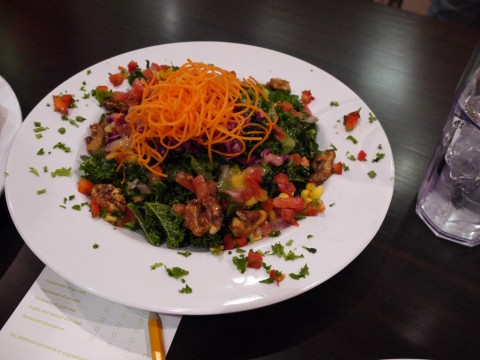 When asked about the gluten-free options, all the staff were able to make suggestions, and it was obvious that the restaurant took the time to educate everybody about gluten issues (which we always really appreciate). The items on the menu that were suggested were the All Hail Kale (pictured above) with tempeh, the Thai Chickin’ salad (but without the chickin’ and wontons), the Bali Bliss Sandwich (but on kale), and the Papa’s Portobello burger (also on kale). 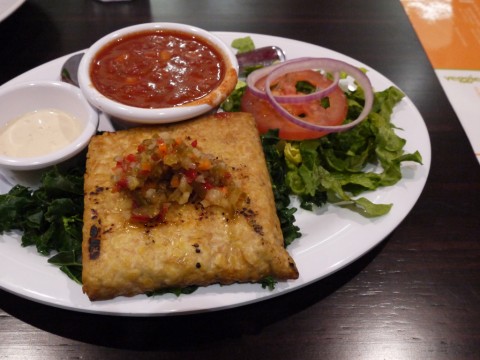 We sampled the All Hail Kale, Bali Bliss on kale, and the Portobello burger. We both quite enjoyed the All Hail Kale, which is basically a marinated kale salad with cabbage, salsa, and a vinaigrette. It was fresh, light, and flavorful. The veggies were obviously fresh, and the dish was satisfying. Sienna found the Portobello burger disappointingly bland. The Bali Bliss was basically as good as a tempeh patty can be when served on a bed of kale. I like tempeh, and if you’ve had a lot of tempeh, then you probably know what I mean. The tempeh itself was good but not particularly flavorful. It was served with an interesting lightly spicy aoli-like sauce, which helped quite a bit.

The final analysis: We both left with the feeling that we weren’t really the intended audience of the Veggie Grill. Although they’ve definitely done their homework to be gluten-free friendly, the menu isn’t marked, and I think that there’s enough room for ingredient confusion with fakin’ chicken and beef that it probably should be marked. I will say that if we lived in Beaverton and some of our vegan friends wanted to get something to eat, it would be on our list of possible places to visit. Check out Portland vegan blog Get Sconed for more coverage.

Gluten-Free Safety Rating: Gluten-Free Friendly but Ask Questions
Times we have visited: 1 (So your experience may vary.)
Overall rating: 2 out of 5 stars
Price compared to “regular”: same

I almost called this post “The Gluten-Free Pizza Smack-Down!” Maybe I should have. We have two separate pizza places in Portland that offer gluten-free pizza. Garlic Jim’s has had it for quite a while. Eat Pizza! has just joined the pack. Did I mention that we have a list of places in town that serve gluten-free pizza?

Let’s get one thing straight right off the bat: When you walk in to most pizza places, you will see that everybody who works there is covered with flour. It’s usually pretty safe to assume that the work surfaces and ovens are also covered with flour (although Garlic Jim’s is accredited gluten-free and so it should be OK – see more on that below). While I didn’t have any problems with the Garlic Jim’s pizza, I did end up having a little trouble after the eating the Eat Pizza.

Garlic Jim’s is a chain with locations in Oregon, California, Washington, Idaho, and Colorado. Strangely enough, their website doesn’t list all the locations in the Portland area, so you’ll get more accurate results with Google Maps. There are two in Vancouver WA, one in Clackamas, and two in Beaverton. We went to the Clackamas Garlic Jim’s, which is located in a strip mall on SE Sunnyside, across the street from the Sunnyside Kaiser Permanente hospital.

Garlic Jim’s is definitely a carry-out or delivery pizza place. There is some seating, but the ambiance is strictly strip mall. If you’re looking for a cozy neighborhood pizza joint with a pinball machine and booths, this is not it. The staff there was friendly and helpful when we went. The people who work there all looked like clean cut college kids. The transaction was smooth. The pizza was boxed and ready to go when we arrived. 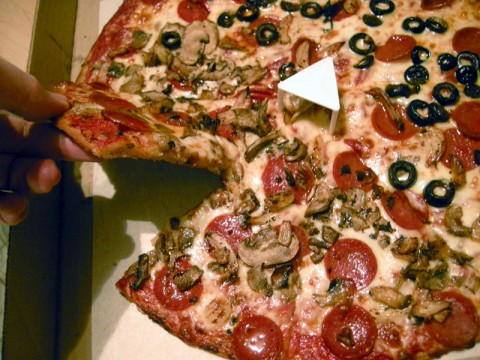 We got a pepperoni with half mushrooms and half olives. We really liked the pizza. In fact, this is now Sienna’s favorite gluten-free pizza in Portland (I still like Sellwood Pizza Kitchen best, but think this is a close second). They have a thin crust going on. Unlike most of the rest of the gluten-free pizza in Portland, the crust here is thin and crunchy, so if that’s the way you like your pizza, you should probably try Garlic Jim’s. True to their name, the pizza is garlicky. Since the crust is thin, you don’t get the phenomena with some other pizzas where they end up being like chewing on a flavorless sponge. We’ve had it twice now and the second time wasn’t as good as the first, so there may be some problems with consistency, but we still liked it.

Garlic Jim’s also has an impressive gluten-free FAQ page, where they talk about how they prevent cross-contamination and how they have a Gluten Free Food Service Accreditation from the Gluten Intolerance Group. That’s pretty awesome! Also, the gluten-free crust happens to be vegan.

Gluten-Free Safety Rating: Gluten-Free friendly but Ask Questions!
Times we have visited: 2 (So your experience may vary.)
Overall rating: 4 out of 5 stars
Price compared to “regular”: Add $3 for the large size.

Like Garlic Jim’s, Eat Pizza isn’t exactly a cozy restaurant, but there is seating. If we had to choose a place to sit down between the two, based only on ambiance and people-watching, we would definitely pick Eat Pizza. It’s a small place with character on Burnside at 21st that does mostly delivery and carry-out. The staff was very friendly and resemble the Garlic Jim’s staff except with tattoos and piercings. The pizza was hot and ready to go when we arrived. We did this with a Groupon, so we also ordered a Mediterranean salad.

Eat Pizza! is unique in the gluten-free pizza market for having three sizes of pizza available: Mini, In-Between, and Giant. They are also vegan-friendly and have vegan cheese available. 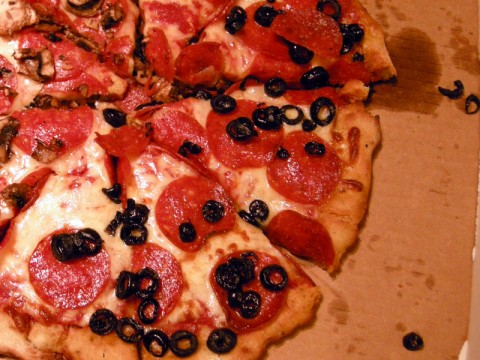 We got a pepperoni pizza with half mushrooms and half olives. Despite the rave reviews we were hearing from our readers, we weren’t as enamored with the pizza at Eat Pizza. The pizza wasn’t as flavorful. There wasn’t enough sauce (or maybe the sauce wasn’t flavorful enough). We thought that the crust was kind of spongy and too dense. I see pizza as being one of those really subjective things. Some people really like thick crust pizza, and if that’s your thing, then maybe you would like them better than we did. I probably would have liked the pizza better if we had ordered it with extra garlic. We’re also scratching our heads a little, because we’ve always thought that New York Style pizza is thin. Maybe their regular pizza is thin?

Gluten-Free Safety Rating: Avoid if you’re really sensitive.
Times we have visited: 1 (So your experience may vary.)
Overall rating: 2 out of 5 stars
Price compared to “regular”: 1 to 3 dollars more, depending on the size.

When it comes to pizza, being gluten-free is especially painful. It’s this thing we all love to eat. Part of me feels ungrateful for writing a lukewarm review for a pizza joint that has gone out of its way to offer something I can eat. At the same, there are places in town to get excellent gluten-free pizza. Our favorites are Sellwood Pizza Kitchen (our review here), the Oasis Cafe on Hawthorne (see our review), and now we can add Garlic Jim’s to the list. We have another winner!

We want to know: What kind of pizza do you like best? Got a favorite pizza place in Portland that I didn’t mention in the review? Let us know in the comments!