Our next post isn’t Portland-specific either, but we’ve been snowed (and now iced) in for a week. So today we’re going to look at a bread recipe from Bette Hagman’s The Gluten-Free Gourmet Bakes Bread. This book is completely full of bread recipes and is a great addition to your library if you’re on a gluten-free diet. On the plus side, there’s something in this book for everyone. On the minus side, every single recipe calls for gelatin, which the author explains helps with the texture and also brings the protein content up to more like that of bread made with wheat. Not that there’s anything SPECIAL about bread made with wheat, except maybe that it’s less expensive to make, easier to cook, and tastes delicious. Not that we’re bitter or anything.

So on to the bread. Did I mention that you need a lot of different kinds of flour for these breads? The one I’m reviewing today, the Sesame Bean Bread, only uses three kinds of flour. They are garfava bean flour, tapioca flour, and cornstarch. By “garfava”, we think they mean garbanzo and fava bean flours mixed together. I love garbonzos, especially in a curry, but am not a fan of fava beans, which an Egyptian-Mediterranean restaurant in San Francisco would put on your falafel sandwich for an extra $0.50. I tried that one time and wanted my fifty cents back I tell you.

We used a bread maker to make this bread. I really don’t really know how a gluten-free person can live without a bread machine. We researched the topic and came up with a list of the best bread machines for gluten free cooking. 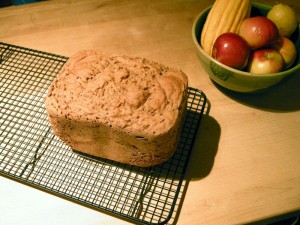 The bread has molasses in it and I think that informs the flavor. Sienna thinks it tastes a little cornstarchy or something, but she really likes it too. 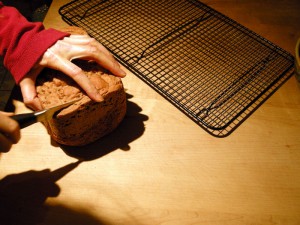 Sometimes you want a flavorful bread to smear some humus on and eat it. Other times you want a bread to get out of the way and provide an unobtrusive addition to a sandwich. I am happy to report that this is the kind of bread you can use for a hamburger or a chicken sandwich and it will not get in the way with its ostentatious stylings. It is, in fact, awesome for hamburgers. Also, unlike some other gluten-free breads we could name, it actually gets crisp when toasted, and is great with jam or honey. 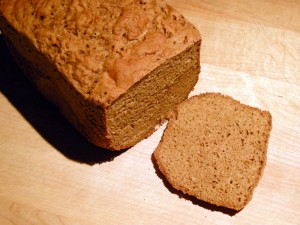