Seems like all you need to do to get MY attention these days is say the word “cookie.” My doctor has me on a no sugar, low carbohydrate diet so that I can lose some weight, and it’s been hard walking around in the grocery store when I know that there are some gluten-free goodies calling my name. On the plus side, it’s working. I’ve lost about ten pounds since I started. All this ignoring cookies and pies is starting to get on my nerves, though. On to the news!

A couple of months back we got a sneak preview of Jensen’s gluten-free buns and mentioned how awesome they were. At the time, they weren’t available, but we heard from them recently that they finally are. Jensen’s have announced that their buns are available at Lingonberries in Vancouver and Lambs in Lake Oswego (and some of the other Lamb’s markets – check with your local one). They are also providing buns to the Corbett and Hawthorne Fish Houses. Anybody out there tried their buns? Let us know!

Crave Bake Shop is Making Cream Puffs and Other Things

We heard from Crave Bake Shop that they are now offering gluten-free cream puffs and are working on recipes for cookies, pies, tarts and cobblers. If you haven’t checked them out yet, we think you should (see our review, here).

Continuing with our sweet streak, I noticed recently (before I started this diet) that Sweetpea Bakery has gluten-free cookies and brownies available at Whole Foods. 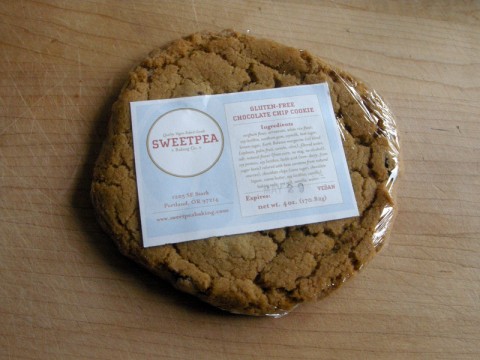 The chocolate chip cookie is really amazing and is like how I remember chocolate chip cookies to be when I was a kid. They’re really delicious. (Note that these items have the “made in a facility shared with wheat” disclaimer). This makes the sweets area of Whole Foods really dangerous for me!

We were contacted last month by Jensen’s Bread and Bakeries, who are working on bringing a brand new gluten free product to market in Portland, Oregon. Both David Jensen and his daughter, Brenna, were diagnosed with Celiac disease a few years ago, and like most people quickly learned that they weren’t going to have anything resembling real bread without some action on their part. Most of our readers can certainly relate, I’m sure. After suffering through months of awful imitations, they started making their own bread.

David’s wife, Debbie, who has been a recreational baker for over 40 years, started working on recipes to make better gluten free bread and buns. She and David spent two and a half years coming up with a product that they think is good enough to sell. Then they took a course at the Portland Small Business Development Center to figure out the next steps. They are almost ready to start selling them, and we got a sneak peek. 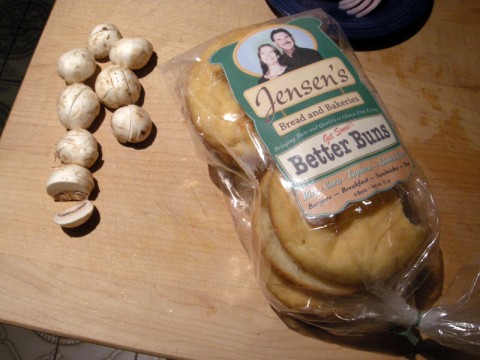 The good news is that we have tried the buns and agree that they are awesome. The bad news is that you can’t buy them – yet. I met David last week and we talked about gluten-free bread, buns, and what the next step is for their company. David is very clearly serious about bread. They are in the process of getting a commercial kitchen set up and hope to get their products on shelves near you in the first quarter of this year. 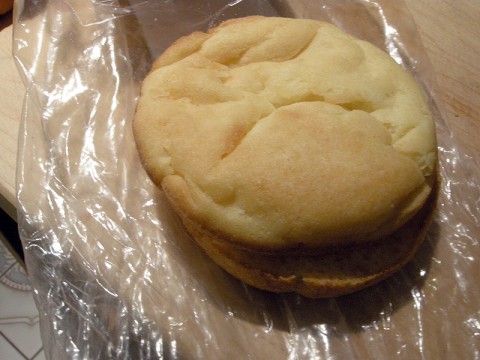 Take a look at this. I brought one of these to work last week and a fellow co-worker who is also gluten-free saw it and couldn’t believe that it was a gluten-free bun. The buns are flexible and soft. They toast excellently and aren’t crumbly. They don’t need to be toasted and freeze well. The flavor is as close to a hamburger bun as I’ve had since I stopped eating the real thing. Sometimes buns and breads will end up having a beany flavor, or a corn aftertaste. These buns don’t suffer from that problem. 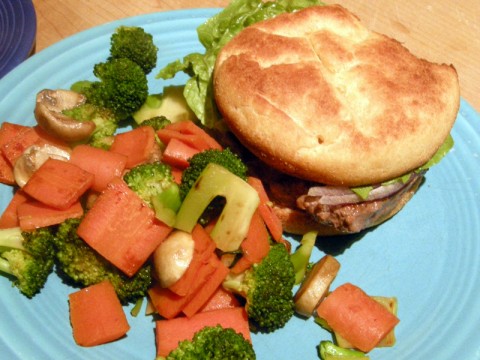 Given buns like these, we had to make some hamburgers immediately! These make awesome hamburgers. They are the best gluten-free buns we have tasted and are head and shoulders above the competition. The Jensens have other gluten-free products in the pipeline, including sesame seed buns, multi-grain buns, and bread. You can check in on their progress on their website, Gluten-Free Concepts. They can be found on Twitter, here and on also Facebook, here. We’re looking forward to hearing more from them!