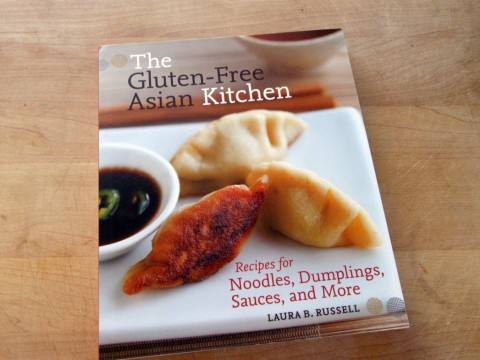 I love Asian food, and it’s one of those things where a person might think that there isn’t any wheat or gluten involved (it’s mostly about rice, right?), but unfortunately that’s not the case. There is very often wheat flour used as a thickener in the sauce, as a binder in something that is traditionally made without wheat, or as a main ingredient in something like noodles. Want to enjoy some delicious Asian cuisine without the worry? The Gluten-Free Asian Kitchen cookbook by Laura B. Russell is here to help.

Something great about this book is that so many cultures are represented. There is Vietnamese Rice Noodle Salad, Korean Bibimbap, Singapore Radish Cakes, Chinese Mandarin Pancakes, Thai Khao Man Gai, Japanese Pork Tonkatsu and more. The book has a great deal of breadth, covering everything from sauces and appetizers, to noodles and dumplings, from meats and tofu to alcohol and sweets. There are also a number of vegetarian dishes. Everything looks really great, and once a person has a couple of the Asian sauces necessary, someone with a reasonably stocked kitchen should be able to find something in the book that they can cook up on short notice. 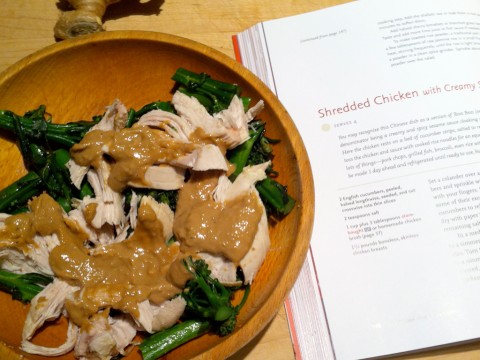 The Shredded Chicken with Creamy Sesame Sauce is really quick and easy to prepare. People who enjoy a good peanut sauce will like this recipe. Despite being simple to throw together, this dish has a kind of sophistication that makes it perfect to serve when you’re entertaining. Finally, it’s a great recipe to make extra for leftovers, especially the sauce. If you keep some of this sauce in the fridge, you can throw it on just about anything to make a quick lunch. 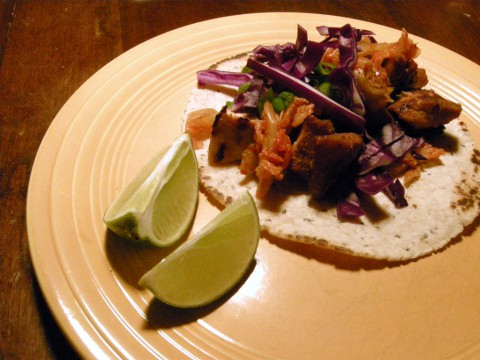 The Korean-style Chicken Tacos are the kind of item that will make your family wander into the kitchen and ask “What are you cooking? It smells good!” With chicken marinaded in Korean chili powder, mirin, garlic, ginger, soy sauce, and sesame oil, they have a unique and very delicious flavor. When we made them, we both had the experience that we hadn’t tasted anything quite like them before. These are supposed to be served with cucumber, kimchi, and bean sprouts, but we thought that they were wonderful with kimchi and red cabbage. 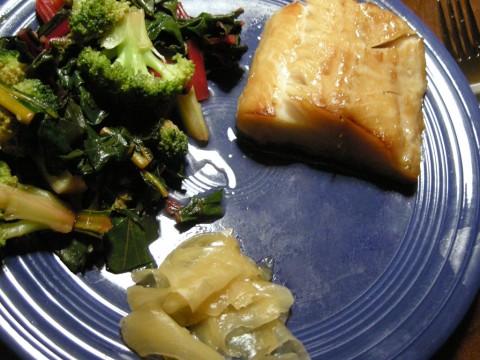 Once you get over the sticker shock when buying black cod, you’ll be happy that you gave this dish a try. Like the Korean chicken tacos, this dish has a unique flavor. The glaze is made with sake, mirin, sugar, and miso paste. The only complication is that the fish should be marinaded overnight, so you need to think ahead. The book suggests serving it with pickled ginger, a recommendation we whole-heartedly second. The acidity of the ginger really does something wonderful to the flavor of the fish. 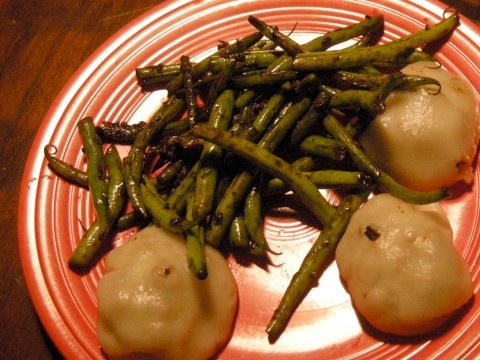 Here are the Sticky Rice Dumplings with Chicken and Mushrooms. There are several dumpling recipes in this book, and these were the first we tried. While the stuffing in the dumplings was delicious, the dumplings as we had cooked them were incredibly sticky and it seemed like the dough was too thick.

We had tried this recipe right before we attended the soups class that the author taught at Bob’s Red Mill. During a break in the class we asked Russell some questions about the recipe. We had a conversation about the dumplings and their preparation, and she ended up very kindly inviting us to come by her house to see how they are done. Besides the dumplings, Russell also showed us how to prepare the Gingery Pork Pot Stickers from her book. The dumplings and the pot stickers both turned out great, and we learned some tricks about preparing both dishes. 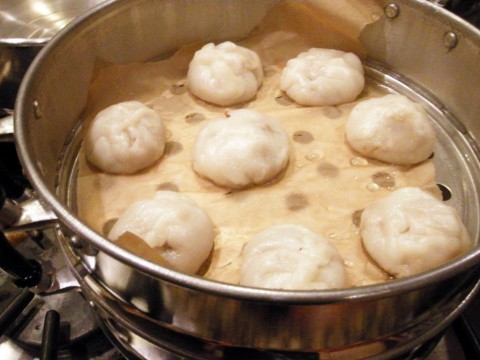 When properly prepared, the dumplings do end up being somewhat sticky. This is because the shell is made with rice flour. There are some things to keep in mind, however. One is that if the dumplings are undercooked, they’ll be even more sticky. If the dumplings are so sticky that you can’t get them out of the pan, off the spoon, off your fingers, etc., then they probably need to cook longer. Also, it’s a good idea to let them set a while after they are done cooking. Russell uses parchment paper in her steamer to keep them from sticking to the pan. We found that using a silicone spatula

to move the dumplings kept them from sticking to our utensils. Finally, although it can be difficult to do so, when making the dumplings, try to put them together in such a way that the shell is of even thickness all around. Mine ended up being really bulky on the bottom where the dumpling shells sealed. 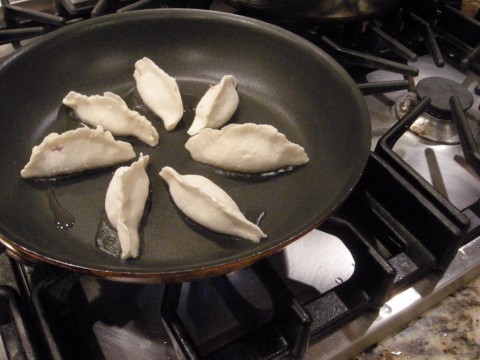 With the pot stickers, there is a point where you throw some water into a pan of heated oil, and it bears repeating that the cook needs to hold a lid over the pan but tilted to keep oil from spattering on them. Aside from this one tricky maneuver, the pot stickers are easier to make, and they’re delicious!

More About the Book

In addition to the recipes, this book has a wealth of information about the ingredients, sauces, and kitchen tools used for making Asian food. You will find here: A chart listing common Asian food ingredients, whether they may contain gluten or not, and brands and sources for gluten-free alternatives; an extensive guide and glossary for common Asian spices, ingredients, sauces, condiments, pantry items, cooking tools, and gadgets; and last, a short primer about enjoying sake by Oregon sommelier Marcus Pakiser.

More About the Author

Laura B. Russell writes “Gluten Freedom,” a monthly column for the Oregonian’s Food Day section. See here for a whole list of previous columns. She is also a contributor to Portland’s MIX magazine, online gluten-free magazine Easy Eats, and Living Without Magazine. She also somehow finds time to keep a blog: “Notes from a Gluten-Free Kitchen” at www.laurabrussell.com.

Many times when I’m sitting down to write an article, I try to come up with an angle. I spent an inordinate amount of time trying to figure out an appropriate angle for this book review, but couldn’t really come up with anything. Finally I realized that there wasn’t any good angle except to say that it’s a great cookbook and we love it. The Gluten-Free Asian Kitchen fills a glaringly empty niche in our gluten-free cookbook library, and does so with great success. We’ve also become huge fans of the author, Laura B. Russell, and can’t wait for her next book.

Get The Gluten-Free Asian Kitchen