Yes yes we already reviewed Pix Patisserie a while back and gave it a rave review. It’s just that we’ve been back a few more times, taken more photos, gathered new relevant information, and also finally got to try their other gluten-free dessert, the Aphrodite. 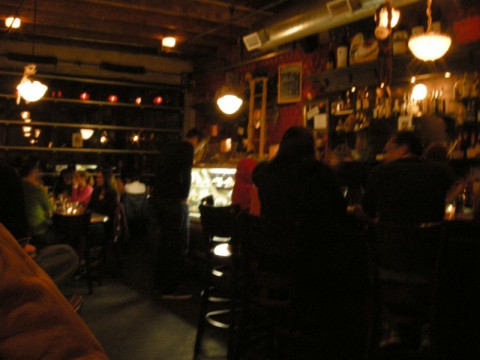 First off, I went to the Pix Patisserie on N Williams with a friend of mine who is allergic to a long list of items that happen to be in a lot of desserts. He’s allergic to almonds, hazelnuts, apricots, apples, pears, peaches, plums, kiwi, cherries, soy protein, and most beans. By “allergic” I mean that he carries an Epi Pen around in case he goes into anaphylactic shock. It’s expired, but he still carries one. I felt lucky because I knew what I could eat there, but he needed to have a rather long discussion with our waitress, which involved going over to the case. The waitress was really cool and friendly, and knew what was in all the desserts. Eventually they were able to find something my friend could eat, which was a good thing for my friend. 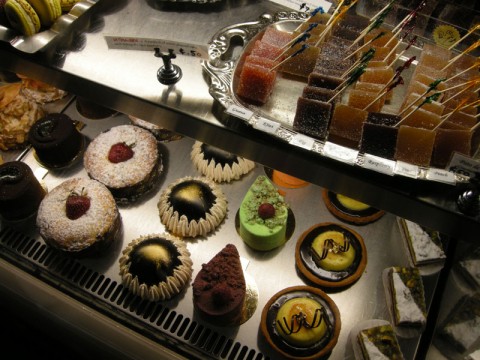 This is what you call dessert pron at the Pix Patisserie on SE Division. The chocolate-colored dessert there on the far left is one of Pix’s gluten-free offerings, the Aphrodite. 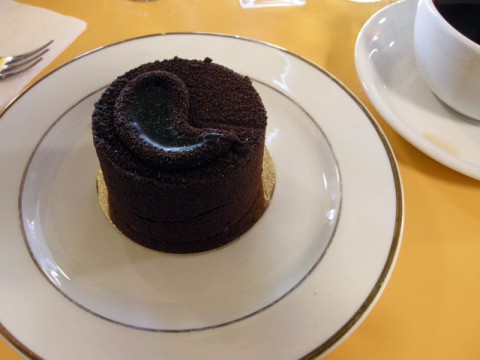 The Aphrodite is a “drunken” cherry in chocolate mousse, with a layer of cherry mousse. The bottom is made of a chocolate flourless biscuit that has been soaked in moscato. All this is in a chocolate shell. If you like chocolate mousse and cherries, this is the dessert for you. I loved mine and would eat one again anytime anywhere, but I think that for my tastes, the Concord is better. 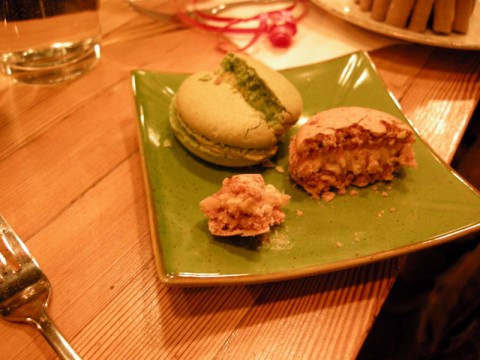 They also have amazing Macarons at Pix Patisserie. These are gluten-free and really have to be tried to be believed. They are air-light, crunchy and chewy at the same time. The macarons at Pix are so good that they were featured in a Sunset Magazine article on macarons recently. 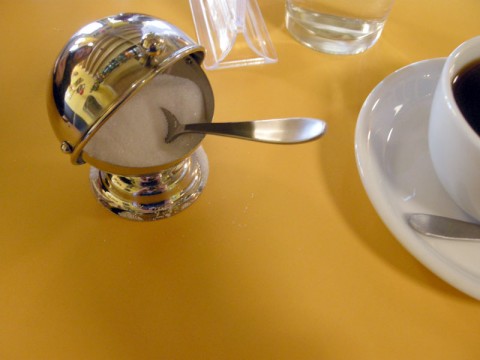 Some more things we love about Pix Patisserie:

Yes you read that right. The Rosemary Mocha. When I asked our server if the Rosemary Mocha was good, she replied, “We wouldn’t serve it to you if we didn’t think it was good.” And it was.

We want to know: Have you been to Pix Patisserie? We love that Portland has awesome little places like Pix. Do you have any favorite items on their menu? Let us know in the comments!

Times we have visited: 4 (So we feel good about our rating.)
Overall rating: 5 out of 5 stars
Price compared to “regular”: Same

The most remarkable thing about my mother is that for thirty years she served the family nothing but leftovers. The original meal has never been found.” ~ Calvin Trillin (1935 – )

The woman just ahead of you at the supermarket checkout has all the delectable groceries you didn’t even know they carried.” ~ Mignon McLaughlin (1913 – 1983)

Statistics show that of those who contract the habit of eating, very few survive.” ~ George Bernard Shaw (1856 – 1950)

Nothing would be more tiresome than eating and drinking if God had not made them a pleasure as well as a necessity.” ~ Voltaire (1694 – 1778)

This week we’ve decided to join the Weekly Geeks in a Blog Carnival. The theme this week is to post a quote a day, and what better subject to post quotes on than food? Nothing better, we say! Nothing better. So here’s today’s quote. Happy Saturday!

An onion can make people cry, but there has never been a vegetable invented to make them laugh.”  ~Will Rogers