Last month we reviewed the Persian Immersian cooking class at Hipcooks. Hipcooks is a new place in Portland Oregon to take cooking classes and they have several gluten-free cooking classes available. We enjoyed the Persian Immersion class so much that we were excited when an opportunity to take another class came up. This time we took the Healthy, Fresh and Zingy 1 class (see full list of classes here and note the handy drop-down menu at the top for “Wheat Free, Dairy Free” classes). This is the first class in a series of three. The focus of the Healthy, Fresh and Zingy classes is to present healthy meals that aren’t going to slow you down and make you feel like it’s nap time.

Here’s what we made: Yin-yang roast red and yellow pepper soup with a pesto garnish; Seared sesame seed crusted ahi tuna (or sesame-crusted marinated tofu can be substituted); Mango-ginger salsa for the tuna; A very simple salad; and mini strawberry gelato ice cream sandwiches. We also had sauvignon blanc to wash it all down with.

To start, we made the gelato first so that it would have time to freeze while we made the rest of the dishes. With a VitaMix, we blended together a little water, some sugar, a lot of frozen strawberries, with basil, and some vanilla. I would never have thought to put basil into a dessert, but it really put some zing into those strawberries, and everybody loved it.

After the gelato, our teacher for the night, Alison, taught us some basic knife skills, and then we made the ying/yang roasted pepper soup. The soup was delicious, but we ended up thinking that it needed something. I think it needed either curry or a lot of black pepper. I could see adding zing with some leek too. 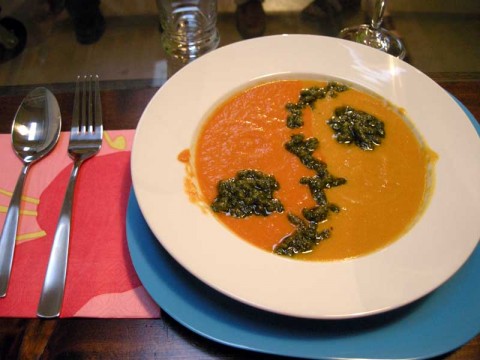 After eating our soup, we seared some tuna. I personally was in disbelief because every time I’ve seared tuna in a pan on a stove, the results were awful. This tuna ended up amazing, however. It looks like maybe the secret is to use lots of oil, cook it very hot, don’t cook it too long, and make sure you start with really good quality fish. The tuna we cooked looked like it was sushi grade. 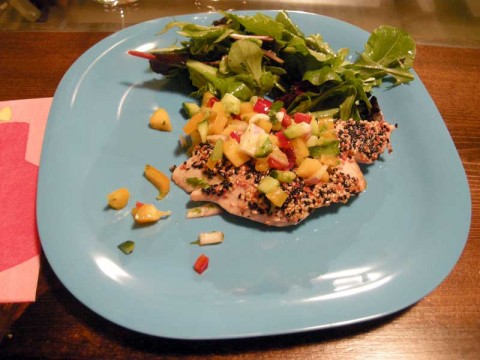 As with our last class, we had a blast. The people were friendly. Everyone participated in the cooking. The enthusiasm of our teacher was contagious. The cooking was fun. The food was delightful. The instructor was sensitive to our one vegetarian member. The wine was great. I ended up with absolutely no complaints. It also occurred to me that a class at Hipcooks would be the perfect third date.

Hipcooks emails you the recipes at midnight after the class. Classes can be found at the Hipcooks website. Not all the classes are gluten-free, so make sure you look for that. Hipcooks is located on North Williams just across the street from Pix Patisserie North (see our review of gluten-free desserts at Pix Patisserie.) Did I also mention that the classes are very affordable? We’re used to seeing classes cost twice this much.

We want to know: So are there more secrets to searing tuna? Have you taken a class at Hipcooks? Let us know in the comments!

Times we have visited: 2 (So we feel pretty good about our score.)
Overall rating: 5 out of 5 stars
Price compared to “regular”: Same and very reasonable.

Iorio is an upscale Southern Italian Restaurant on the 900 block of SE Hawthorne. In addition to winning the Portland CitySearch Best Italian Restaurant award for 2008, they are “committed to providing sustainable local and organic” food and will accommodate any dietary restrictions. For gluten-free folks and people with celiac disease, they have a number of nice options, and can modify some of the items on their menu to suit. In the case of the pastas and gnocchi, they ask that you call one day ahead. 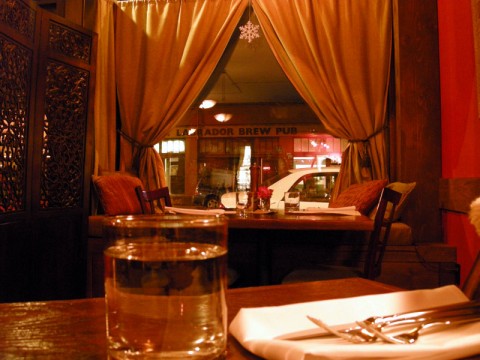 Lots of atmosphere at Iorio

We were a little nervous when we arrived at the restaurant, because it was basically empty. However, by the time we got our entrees the restaurant had begun to fill up. The restaurant is upscale and a larger than usual number of people were dressed up (for Portland, that is.) Our waiter was knowledgeable and also asked the chef some questions for us. 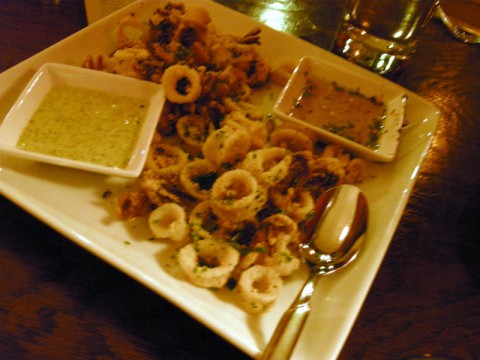 One thing that we got excited about immediately is that their award-winning calamari can be prepared gluten-free, so we ordered that, and it was delicious! Calamari was one of the things that I had recently figured I wouldn’t be eating again any time soon, so it was a nice treat.

We also got the Caesar Salad, which they serve with whole leaves. This turned out to be disappointing. It needed pepper, lemon juice, anchovies, and croutons. The calamari was so good we found ourselves surprised at the Caesar Salad.

Next came the gluten-free gnocchi and fresine pasta. The fresine is made with fresh pasta and a red sauce and can be ordered with either meatballs or sausage. The gnocchi is served with pesto. The best item from either dish was the meatballs. They were outstanding. Next, I would say the fresh pasta was good. It was a little inconsistent somehow, but ended up being way better than the standard rice noodles you can get at the store. The tomato sauce, however, was disappointing. It was sweet and sort of flavorless. Even worse were the gnocchi. They were so salty that we couldn’t taste the pesto. It was like eating the dead sea salty. I can only imagine that it was that bad by some fluke. 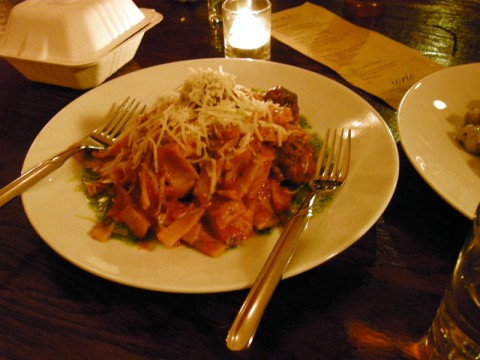 Last, they had a gluten-free chocolate flourless cake with a scoop of vanilla gelato and raspberry sauce. The presentation was delightful and the cake was warm like it had been cooked especially for us. It was really amazing. Like really really mindblowingly amazing. 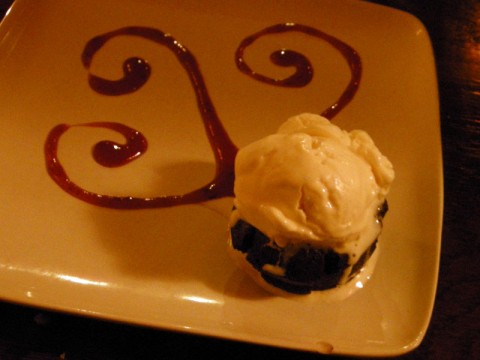 All of which left us scratching our heads that a restaurant could be so good and yet so bad at the same time. On the plus side, they have gluten-free versions of some exciting dishes. Here’s how we scored everything:

Later note: It seems like the service there is spotty, so we’ve downgraded their rating.

Times we have visited: 4 (So we feel pretty good about this rating.)
Overall rating: 2 out of 5 stars
Price compared to “regular”: Same price. Most dishes are around $18.