Welcome to another restaurant review here at Gluten Free Portland. We certainly took our time getting around to Grandma Leeth’s. For one thing, it’s kind of all the way across town from us. For the other, it’s very much a family restaurant. In that department, it’s like Old Wives Tales on steroids. They also try to cover a lot of ground. For example, they characterize their menu as “World Comfort Food.” They also have WiFi and several different flavors of childcare. For example, you can bring your 2 to 9 year old kids and have them eat in another room – with supervision by their childcare staff. They also (of course) have a kid’s menu.

The best way I could come up with to describe the atmosphere is sort of upscale Sesame Street. There is a main dining area which is separated from a large playroom by a red wall with variously shaped windows in it. In the back upstairs they have a smaller dining area which our waitress described as “a more formal dining area.” Generally, the place has a fun, energetic atmosphere and gives a person a nice feeling of being safe. (We arrived kind of early on a Saturday night so the restaurant was a little empty. It filled up later.) 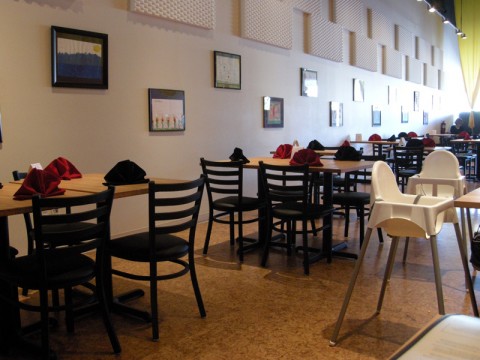 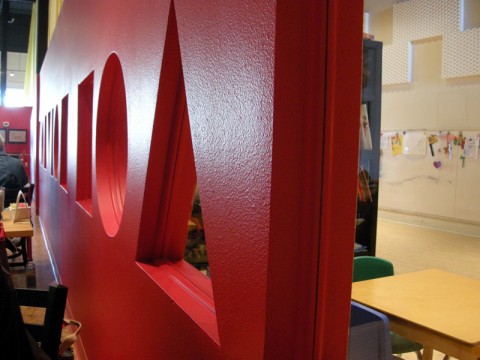 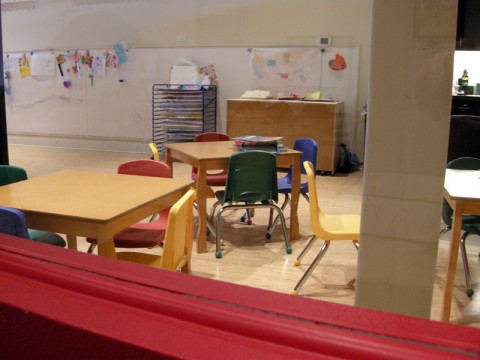 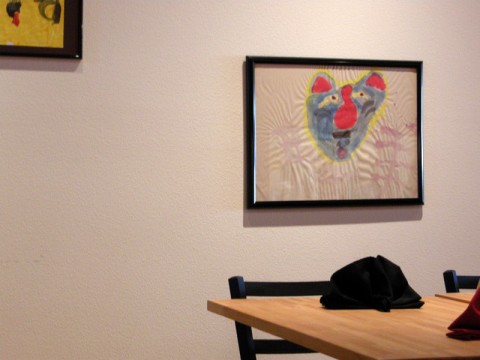 The menu is a little confusing as far as the layout goes, but I can’t really tell you why. On the plus side, they mark everything for gluten free, spicy, and vegetarian so you can tell at a glance what is what. We got the Dravidian Dhal as an appetizer. I ordered the gluten-free Coconut Milk Curry and Sienna had the Quiche with Caesar Salad (which aren’t gluten-free.) Strangely, their child menu isn’t marked for gluten-free items—and really only appears to have one. 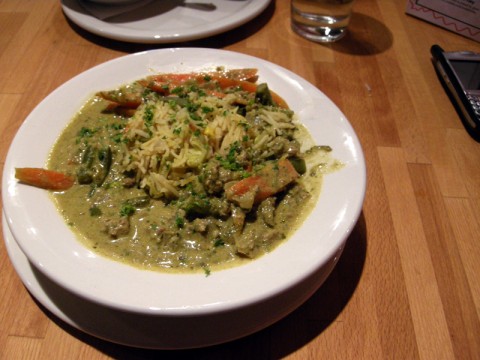 Our server was friendly and awesome. She did a great job of talking to us about the gluten-free items and also had suggestions about favorites.

When it arrived, we both agreed that the Dhal was only OK. I think it needed some cardamom and salt. It also arrived luke-warm, which was disappointing. The Coconut Milk Curry was awesome and properly heated. Sienna was also very pleased with the quiche, but felt like the Caesar Salad needed some zing. The Dhal was much better the next day, so maybe they just need to let it stew longer.

They have one or two gluten free desserts. One is Sorbet (which is also vegan). The other on their menu is called Marronen and is described as “An Austrian-inspired blessing of chocolate + chestnuts covered in chocolate espresso whipped cream. Ice cream, or espresso shot?” We passed on the dessert because we had a prior plan to visit Pix Patisserie.

Some final things about Grandma Leeth’s:

Overall, we felt like the experience was nice, and we can definitely see why people would enjoy bringing their kids to Grandma Leeth’s. The food was good too.

We want to know: Have you been to Grandma Leeth’s? Do you have any favorite items on their menu? Let us know in the comments!

Times we have visited: 1 (So your experience may vary.)
Overall rating: 3.5 out of 5 stars
Price compared to “regular”: Same

People often ask me what I miss the most about living in San Francisco and my answer is always the same. I miss living next to Chinatown. I especially miss living next to Chinatown during the Lunar New Year celebrations. During this time, all of Chinatown is full of energy. There are lion dancers, firecrackers, moon cakes, and finally, the Chinese New Year Parade, with what seems like a million dragon dancers. Can you tell I miss it? I do.

Luckily, Portland has its own slice of Chinatown. Downtown at the Chinese Classical Garden, there is plenty to do and see during the 15 days starting January 26. They will have lion dances, painting demonstrations, Tai Chi fan and sword demonstrations, and live music. These events will culminate in a Lantern Viewing on Sunday, February 8. Download a PDF schedule of events here.

2009 is the year of the Ox. The ox is known to be intelligent, stable, patient, hard-working, and friendly, but can also be stubborn. People born in ox years tend to be planners, engineers or architects. Traditionally, you can expect the year of the ox one of prosperity through hard work, and a time where past obstacles are overcome.

Finally! A Portland-specific gluten-free food review: The Mississippi Pizza Pub in Portland Oregon is now making gluten-free pizza, and I’m going to say up front that both of us thought that their pizza was OK. They offer this pizza both at the restaurant and in a “take and bake” form. We opted for the take and bake. That’s because we are much too cool for the kind of speed-of-light gentrification and further boutique-izing that the Mississippi area has been going though (ha ha only joking – but really isn’t it an amazing change from just three years ago?)

On their website, the gluten-free page says that you need to call ahead the day before to order their special crust, but the person we talked to said that it was no longer necessary. If you go to their gluten-free page you will see that they are very serious about being gluten-free. For instance, they have put in a whole separate pizza oven just for the gluten-free pizzas. We think that’s awesome.

In addition to pizza, they also have gluten-free beer and other various alcoholic beverages, and live music almost every night of the week. There is, of course, a gotcha or two. Gotcha number 1 is that they only make the gluten-free crusts in 16 inch form, which we don’t think is a huge problem. Gotcha number two is that the gluten-free pizzas are two dollars more than the regular ones, which is a bummer, but more reasonable than we’re used to for gluten-free fare. But how about the pizza?

We got what we call the “Dave and Sienna special.” It has red pizza sauce AND pesto with extra garlic on the whole pizza and then half mushrooms (for Sienna) and half black olives (for me.) No cheese. Like I said, we did the “take and bake” option where you put the pizza in the oven following their directions. The pizza was awesome. They put the right amount of sauce on the pizza, and didn’t skimp on the ingredients. I know you’re all like: “Yeah OK but THE CRUST Dave, get on with THE CRUST!” So I will get on with the crust. The crust was good. It is definitely more like the kind of crust that is kind of short and a bit crumbly. It was also definitely crunchy. It was almost what I call a Long Island style crossed with a deep dish style. To say what it wasn’t: it wasn’t chewy or bready, which for us was just fine.

Being used to gluten-free pizza crusts that either have a texture like extruded foam, and/or come out of the oven rock hard, we were delighted. While they do make wheat pizza there, they also seem to take enough care to prevent cross-contamination that a person with gluten allergy should be OK (depending on how bad your allergy is, obviously.) We will definitely go back there sometime in the future to do a more complete review of the restaurant itself.

Times we have visited: 2 (So we feel pretty good about our rating.)
Overall rating: 3 out of 5 stars
Price compared to “regular”: Somewhere around 11% more expensive