New Survey!
You may have noticed that we took the poll down from its usual place on the top righthand corner. This is because we’ve teamed up with Monika at Hipcooks to bring you a full-blown survey! Take a minute or two to fill out this survey (survey has ended). Monika is hoping to use the information to plan more gluten-free classes at Hipcooks.

Book Reading Coming to Powell’s Books: Ani’s Raw Food Desserts: 85 Easy, Delectable Sweets and Treats by Ani Phyo
On Sunday, May 31 at Powell’s Books, Ani Phyo will be visiting to discuss her new book. Her desserts are raw, gluten-free, dairy-free, processed sugar-free, and cruelty-free. She even makes muffins. I’m trying to imagine how you make raw muffins!

Sienna and I were out of Portland Oregon on vacation last week. We drove down to Los Angeles to visit her grandmother and also some friends we have down there. We stopped in the San Francisco Bay Area and a bunch of places in between. So the bad news is that I didn’t post much last week (I actually wrote some things beforehand and then scheduled them.) The good news is that we have some exciting gluten-free travel info coming up. We even found a great B&B where the owner cooked me some gluten-free pancakes! I’m sure you all know how much I love gluten-free pancakes.

1. I was born in Albuquerque New Mexico, which is where Bugs Bunny was always missing a left turn. I grew up in Colorado, studied Fine Arts at the University of Colorado in Boulder, and then lived in San Francisco for 13 years before moving to Portland, Oregon.

2. My favorite place to be in Portland Oregon is at the Classical Chinese Garden. I love to go there, sit in the teahouse, drink tea, eat treats, and look at the pond and the trees.

3. Speaking of ponds, I created a 200 gallon goldfish pond in my back yard last spring. It’s one of my favorite things. 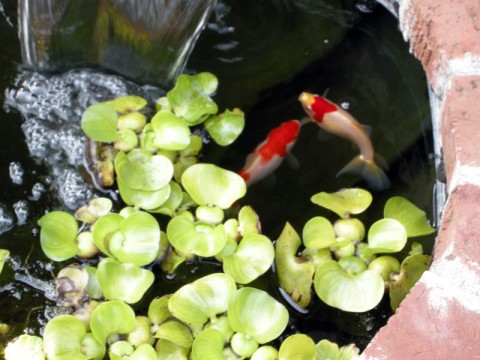 5. As I mentioned above, I studied fine art in college. Mostly painting. I continue to do art now and was in a small group show at a gallery in Portland earlier this year. As with everything else, I have an artist website that I try to update here and there. I also do a lot of amateur photography.

6. Travel is one of my favorite things to do. I’ve been to Chicago, New York City, Los Angeles, all through Canada, most of the Western United States, and internationally to Japan and Bali. I might love traveling more than food.

7. I also read a lot. I read fast, will read anything, and have a book collection. Most of this is an enormous collection of sleazy paperback detective fiction from the ’50s, ’60s, and ’70s. Two other authors I collect are Edward Gorey and translated works of Natsume Soseki.

The rules are simple. Link to your original tagger and list these rules in your post. Simply share seven facts about yourself in the post. Tag seven people at the end of your post and let them know they’ve been tagged. And have fun!

Thanks again to Gina for tagging me. Here are the seven people I’m tagging, in alphabetical order:

1. Aleta who isn’t gluten-free but who does cooking, recipes, great photos with one eye on nutrition at The Omnomicon.

2. Allergic Girl who covers food allergies, health and worry-free dinners over at allergicgirl.blogspot.com.

3. Ginger over at FreshGinger who is always cooking up interesting gluten-free recipes.

4. Dana at Gluten Free in Cleveland, who does gluten free recipes and reviews for Cleveland Ohio.

5. Kab over at Good Stuff NW who isn’t gluten free but who covers food, restaurant reviews, and good stuff in the Pacific Northwest.

6. My pal, The Dark who is all about the book reviews and horror paper models over at Dark in the Dark.

7. Sea who creates and reviews gluten-free recipes and also hosts the adopt a gluten-free blogger at Book of Yum.

Thanks for stopping by. More to come soon!