We realized recently that we didn’t have any breakfast or brunch reviews, so we decided to make it a point to get over to Francis. We’d already heard a lot about the restaurant from friends of ours, so we were looking forward to it. 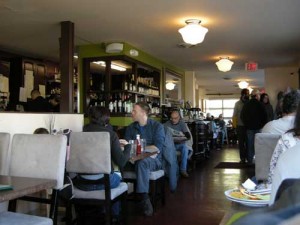 First some miscellaneous notes about Francis. The restaurant has a nice atmosphere and is clearly popular. Our waiter was awesome, friendly, and spent a lot of time talking to us about the gluten-free options. Besides a gluten-free menu section, they also have vegan options. The coffee was awful, but the grapefruit juice was perfect. Our food came out in a timely manner. The presentation was good. I love fresh fruit! Did I mention that they have a whole section of their menu devoted to gluten-free and vegan options? That was really nice. They also have a full bar. 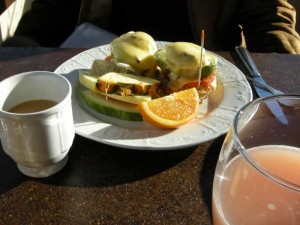 Our Head of Research, Sienna, had the special of the day Eggs Benedict, which in this case was baked avocado and tomato with a truffle Hollandaise sauce. They are made gluten-free by serving them on a gluten-free biscuit. Sienna told me to note in the review that she is hard to please when it comes to Eggs Benedict, and that she felt her dish was only so-so. For one, the poached eggs were undercooked, and also she felt like the dish was a little bland. She was left wishing for some Canadian bacon. 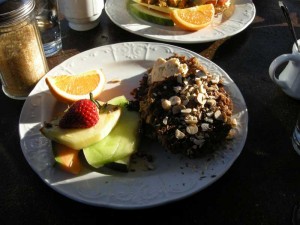 I had the gluten-free “overnight” oatmeal pancakes, which I thought they were really good. They are basically oatmeal pancakes, heavy on the oatmeal, with apple chunks and hazelnuts. They are nutty and very flavorful. The one complaint we had was that they seemed about twice as thick as they should be. Sienna didn’t like them because they ended up being a little underdone in the center. For me, the thickness imparted a kind of “hearty” feel to them which won me over in the end. I would definitely order this again. 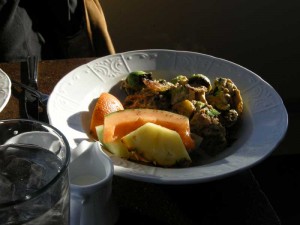 Our waiter did something custom for us, which was to take the curry tofu scramble and have the chef make it with vegetable hash. The waiter told us this was his favorite dish. I was expecting a more traditional yellow curry, which I sometimes do with my eggs at home. Instead this dish is a coconut curry with just a bit of a hot spicy kick. Included in the hash (besides eggs) were brussels sprouts, onions, squash, and broccoli. It took my palate a while to switch gears, but in the end I decided that I could see why the waiter liked it so much.

There’s a phenomena where our expectations go up a notch when we are presented with a fancy menu, and in the case of Francis this went against the restaurant. Originally, we were thinking about giving them only three and a half stars because we felt like the food wasn’t amazing enough for the fancy menu, but in the end I decided to give them an extra half star for being adventurous. They are definitely that and are doing it well.

P.S. The gluten-free biscuits are perfect!!!

Times we have visited: 1 (So your experience may vary)
Overall rating: 4 out of 5 stars
Price compared to “regular”: Same price, although the restaurant itself is a little more expensive than your regular brunch spot.

Ah pancakes. When we first moved to Portland, I fell in love with pancakes. I had never really liked pancakes much, except for the silver dollar kind you could get at fancy restaurants. For about two months I was looking for work, and every couple of mornings I would get up and make pancakes for breakfast. For me, it became the thing to do when you don’t know what else to do: make pancakes.

Imagine my excitement after being sentenced to a world without wheat pancakes to find that Trader Joe’s had some gluten free ones. 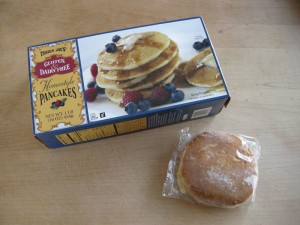 While Trader Joe’s earns some points with my gluten-free self for making such a product available, they lose some points with my environmentally conscious self for packaging these pancakes in four individual plastic wrappers and a cardboard box. The box is sealed on the ends with round, clear plastic stickers, which kind of pushes it even further. I mean, when I’m opening a box of pancakes, the last thing I want to do is feel like I’m breaking the seal on a royal decree or something. The other thing they lose points for is 430 mg of salt per serving! That’s the kind of amounts I’m used to seeing in canned soups.

They do taste like pancakes, which is a good thing, and cook up well. They are light and fluffy like a good pancake should be, but they do suffer a bit from the dreaded gluten-free spongy texture. 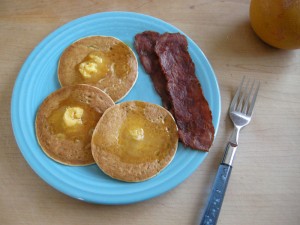 On the plus side, however, these pancakes do what they are supposed to do: deliver butter, jam, and/or maple syrup in a no-nonsense fashion. Here’s a bonus recipe for those of you who made it this far.

Put all ingredients in a dish and mash them up until mixed. You may need to soften the butter first. If you need to use the orange butter soon, put in the freezer to re-solidify. Otherwise return to the refrigerator. This stuff is not sweet, so you and your celiac friends will probably want some maple syrup to go with.