We got an email from reader Montserrat about a Thai place at Division and 84th named Thai Fresh. Here’s what they had to say about the restaurant:

hey, just wanted to give you a heads up on a Thai restaurant called Thai fresh. it is located on 84th and division on the north side of the street. i had dinner there last night and the food was great. the best part is that if you tell them you can’t have gluten they will modify the use of their spices (including using wheat free soy sauce) and if you are eating family style they will also leave gluten out of the rest of the dishes! they are super nice, very accommodating and the food was delicious.

We love it when people email us about restaurants and, coincidentally, we love Thai food! Portland has great Thai food in general, and it’s good to hear about new places. So it was natural that we would have to give it a try. We’ve been there twice now and think it’s pretty good.

Both times we’ve gone, the restaurant has been pretty full, but both times we were able to sit down immediately. Both times the wait staff were extremely helpful and discussed food allergies and gluten very thoroughly. You can order almost the entire menu gluten-free. That’s really awesome. The friendly wait staff also made me relax almost instantly. Sometimes I go to restaurants and I feel like I’m taking a risk trusting the staff, but not here.

The Spring Rolls are the deep fried kind with ground pork (or vegetarian), carrots, onions, mushrooms, and clear noodles. They are served with the standard Thai sweet & sour sauce. These are really amazing. 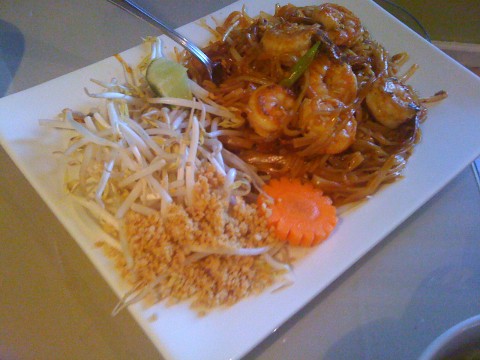 The Pad Thai is good. It’s a little different from some of the Pad Thai around town in that it doesn’t seem quite as sweet and maybe has tomato sauce in it? The flavor is good, the noodles were done perfectly, and the sauce has a little bit of an afterburn, which makes it interesting.

Tom Kha is one of our favorite dishes. There’s nothing quite like coconut soup. We felt like theirs was certainly acceptable, but thought it was missing something. Like maybe some hot pepper oil.

We also had some Yellow Curry. This is the standard dish that comes with potatoes, carrots, onions, and your meat of choice. We had it with chicken. To us, the curry seemed a little watery. Also, there was a little bit of an anise taste to it that Sienna wasn’t really into. When we asked the waitress about how it tasted a bit like anise, she figured that it was the basil we were tasting. Some people like anise, and others don’t. I wasn’t bothered by the anise flavor, but I kept wishing that the sauce was a little thicker. Maybe they don’t use a thickener with the gluten-free version?

We both really loved the Lemongrass Chicken. This is chicken breast, marinated with lemongrass, with vegetables over rice. It comes with peanut sauce. We’re both real suckers for peanut sauce. The chicken and vegetables were perfectly prepared, and everything was really amazing.

Both our visits left us with a positive impression of the restaurant. It’s small, clean, and has a nice energy. Our food came out in a reasonable amount of time, and the staff was friendly and attentive. We didn’t feel like it’s the best Thai food in town, but then there’s a lot of rather stiff competition in Portland, and we were generally pleased with our selections. If you’re gluten-free, it’s great to go somewhere that you don’t have to feel like you’re taking a huge risk. Did I mention that you can substitute brown rice for $2? That’s really cool too.

Gluten-Free Safety Rating: Gluten-free Friendly but Ask Questions!
Times we have visited: 2 (So your experience may vary.)
Overall rating: 3.5 out of 5 stars
Price compared to “regular”: Same.

We were contacted by the Jade Tea House a couple of weeks ago. We’ve eaten there twice now and really enjoyed it both times. The Jade Tea House is on SE 13th in Sellwood (a few blocks from Picazzo’s), so it’s a little bit of a drive from our neighborhood.

Sienna and I both thought that the Jade Tea House would make for a great place to take a first date. The food is good, the menu is interesting, the restaurant has a bright and energetic vibe, and the people watching is excellent. Almost everything on the menu is gluten free or can be made gluten free. The food is a mixture of Vietnamese and Thai with some other Asian cuisines thrown in and baguette sandwiches. Before you get excited, I have to warn you that the baguettes are one of the things on their menu that aren’t gluten free. The other items with gluten are their wonton soup and steamed Hum Bao appetizer. Pretty much everything else is gluten-free, however.

Both times we went, the place was packed, and they seem to have a thriving take-out business going, too. For appetizers, they have items like Salad Rolls (Spring Rolls), Chicken Satay, Fried Coconut Encrusted Shrimp, and Fried Salt & Pepper Squid. For entrees, dishes like Sesame Beef, Yellow Chicken Curry, Garlic Lemongrass Chicken, and Stir Fried Green Beans. For desserts they have Black Rice Pudding, Sweet Rice & Mango, Frozen Yogurt, and Assorted Pastries. 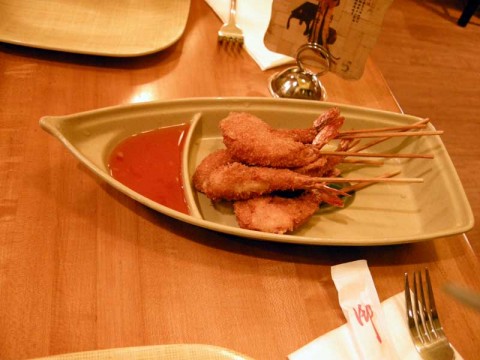 The first time we went, we got the Fried Coconut Shrimp. These were served with a delicious Thai-style fish sauce. 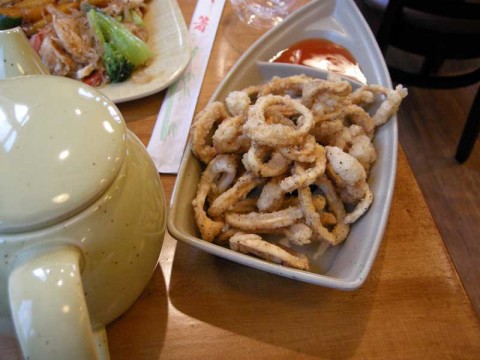 Then the next time, we got some of the Fried Salt and Pepper Squid. When asked about their fryer, we were told that they don’t fry anything with gluten in it, so that’s good news. The Salt and Pepper Squid are the best gluten-free fried squid I’ve ever had. Our only complaint was that they were a little salty for our tastes. The Coconut Shrimp was really awesome, and perfectly done. 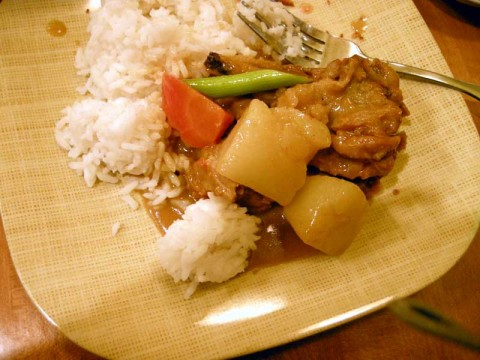 For entries, we tried the Yellow Curry Chicken and two specials which aren’t on the normal menu. We got a Fried Glass Noodle dish and a Mango Chicken dish. I’m used to Vietnamese cooking being very simple and wholesome, and that was the way these dishes were. The Yellow Curry Chicken was like a Thai Yellow Curry with chicken drumsticks, carrots, and chunks of potato in it. We both really enjoyed it. The glass noodles had a light garlic sauce with chicken, shrimp and vegetables. We enjoyed the dish, but ended up feeling like the noodles were overdone. The Mango Chicken comes with a savory brown sauce and vegetables. The slices of mango were perfectly ripe, and this ended up being my favorite dish from both nights. I hope they put it on the regular menu! 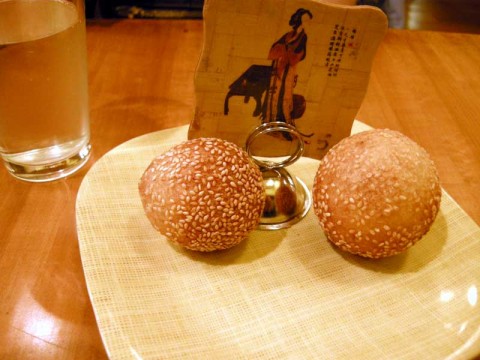 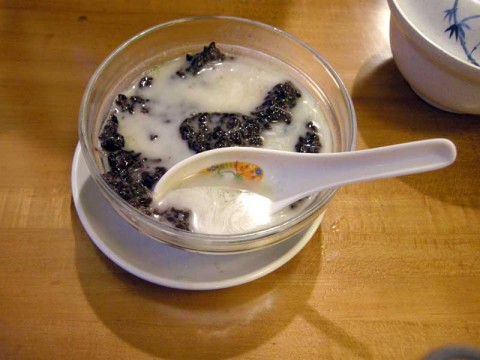 If you ever find yourself wondering how much Sienna and I sacrifice to bring you the best restaurant reviews, look no further than this example. Since desserts are one of those things that can be kind of hard to get gluten free, we take notice when a restaurant has gluten free desserts, and for the sake of our readers, we often find ourselves with no choice but to eat dessert. Yes. We do this all for you. I’m a real fan of black rice pudding. In its most basic form, this is a pudding made from black rice, which is naturally sweet. Although it’s called “black rice” it’s actually more of a very dark purple. The black rice pudding was good, but we found the coconut milk sauce to be too sweet. The Chinese Donuts are hollow globes made of rice gluten. Inside each doughnut is a mixture of sweet bean paste and grated coconut. These were really wonderful. I found myself hoping that they start making lotus seed paste ones too!

We had very few complaints about our dining experience both nights. Our food came out promptly, and the people there were able to answer all our questions about gluten and their food. We wished that their wait staff was a little easier to get a hold of, and on one night our entrees made it to the table before the appetizer did. We barely noticed, however, because we were happy with our food and enjoying the atmosphere.

On a final note, as could be expected from a place that calls itself a tea house, they have fancy teas. We tried a pot of Oolong tea and were very pleased. The thing we liked most about the Jade Tea House is that it is a little different and fun. We really enjoyed the place and plan to go back very soon.

We want to know: Do you know of anywhere in Portland to get Chinese Donuts? Have you eaten at the Jade tea House? What did you think? Let us know!

Gluten-Free Safety Rating: Gluten-Free Friendly But Ask Questions
Times we have visited: 2 (So your experience may vary.)
Overall rating: 4 out of 5 stars
Price compared to “regular”: Same